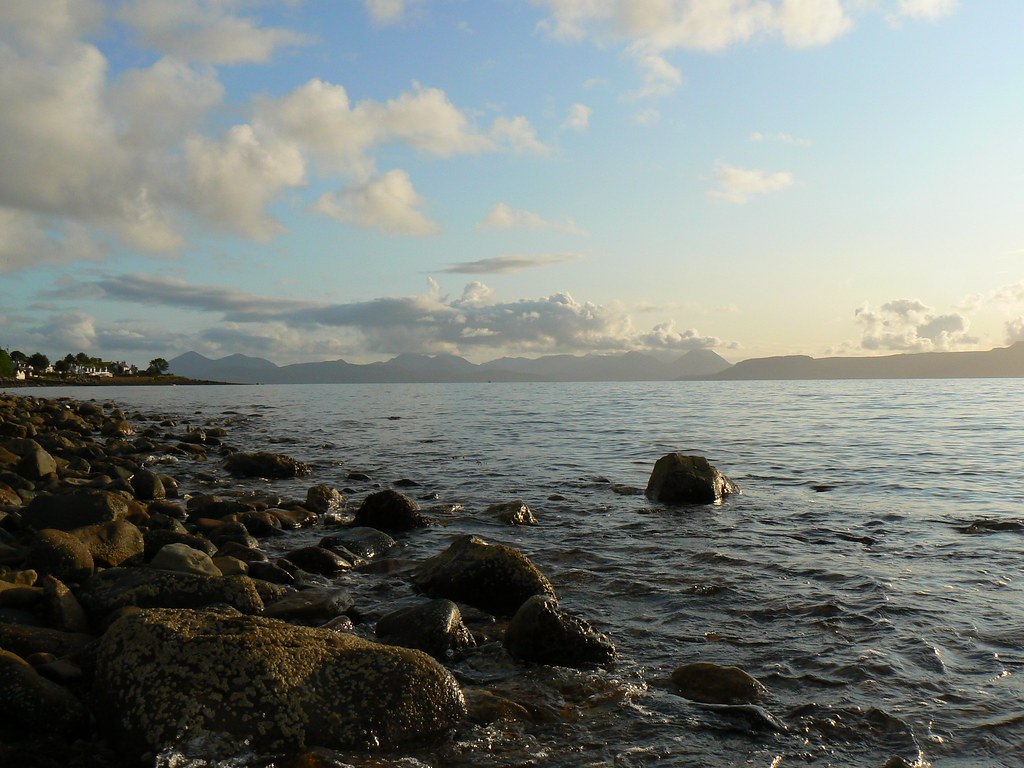 The late afternoon sunshine set off the deep blue waters of the Inner Sound perfectly. Dun Caan on Raasay was a distinctive dark cone in front of the paler Cuillin of Skye. A delicious full plate of fish and chips was accompanied by a fine local ale. After crossing the Bealach na Ba it was the perfect end of the day at the Applecross Inn, one of the most achingly beautiful spots on the west coast of Scotland.

Earlier in the day, after a brief stop to resupply in Shieldaig, we’d left the van in a small parking area at the end of the estate path which heads uphill to Loch Gaineamhach, nestled below the eastern coires of Beinn Bhan. This hill, its highest point at 896m, is a sprawling mountain stretching from Kishorn in the south through almost to Applecross itself in the north. Whilst its western sides roll gently out into languid moorland, the eastern side is a series of yawning coires with rocky spurs and buttresses between them. This side is a scrambler’s paradise with countless lines to suit all abilities. 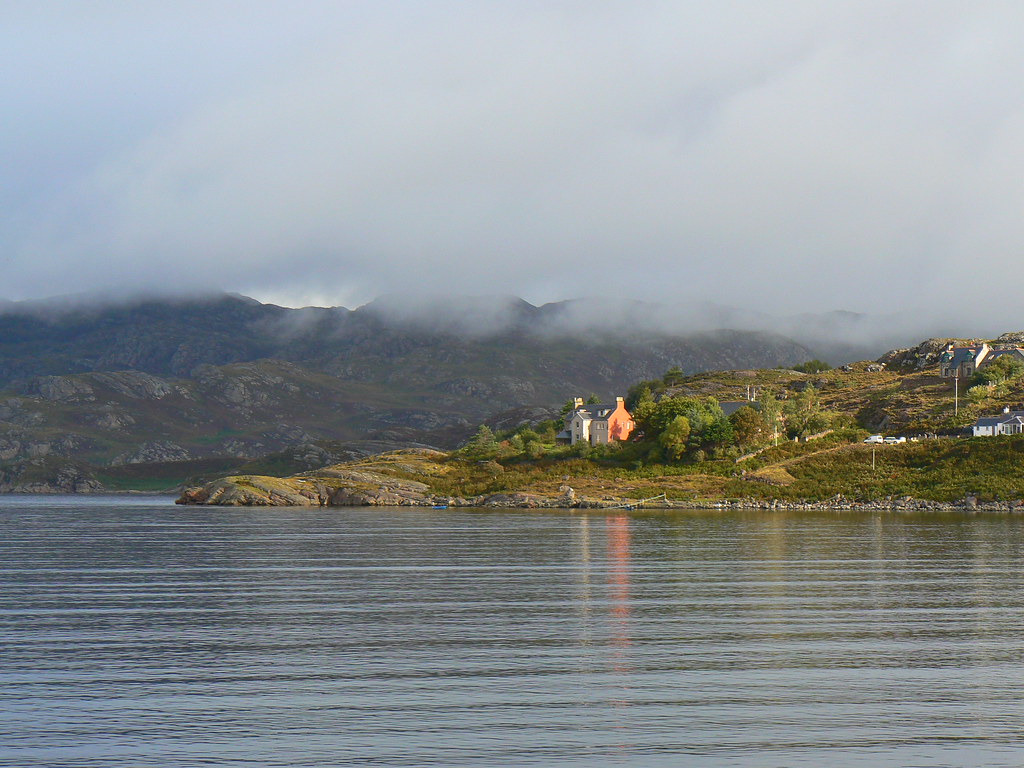 We walked in as far as the loch itself. The weather was mixed with low cloud obscuring views and the occasional shower blowing up from Kishorn. It was mild and a little muggy and it was nice to gain a bit of height and pause in the breeze as we contemplated the rocky terraces of Sron Coire an Fhamhair which form the northern side of its namesake coire. 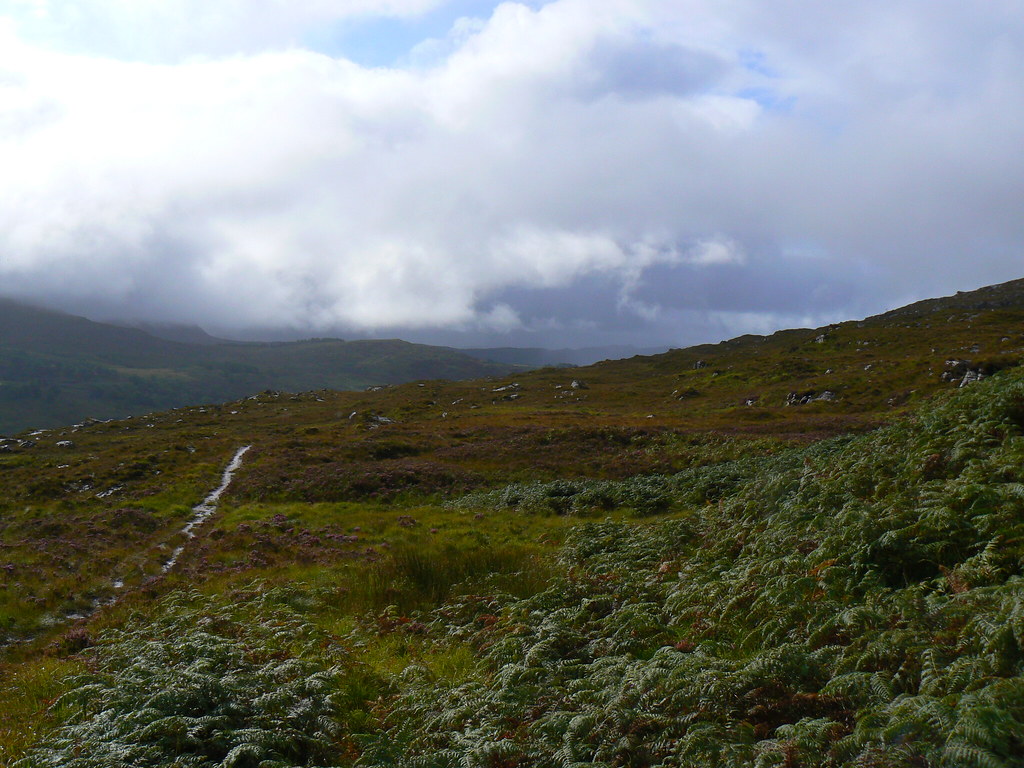 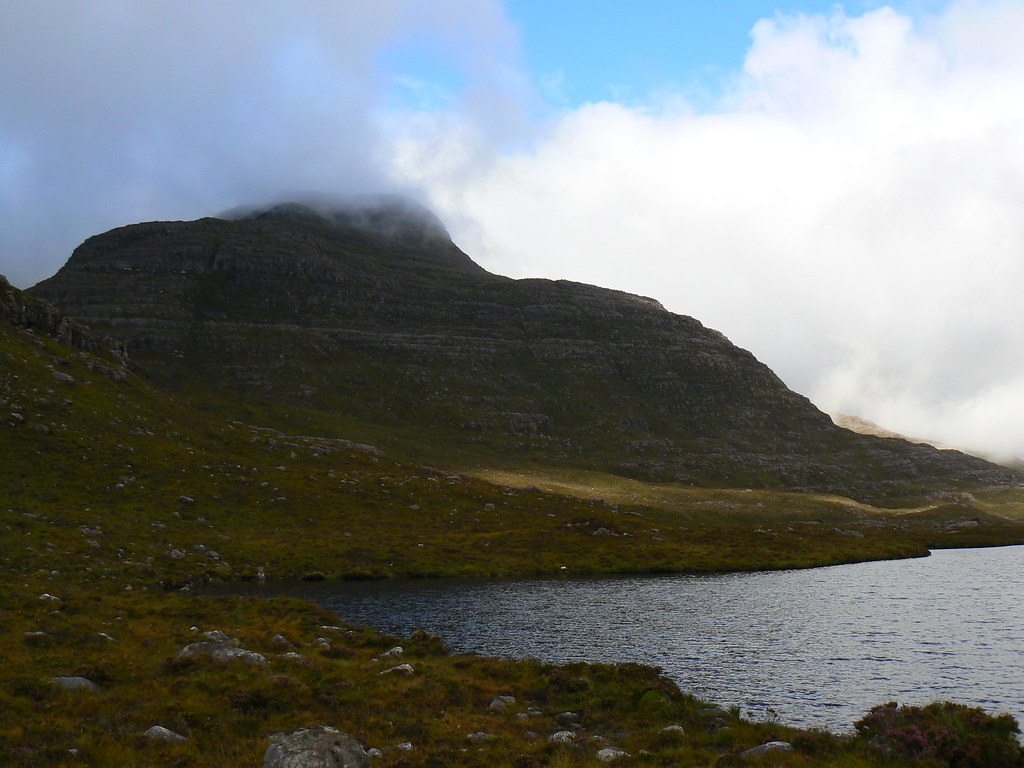 The terraces offer a great array of scrambling, from simple Grade 1 up to much tougher Grade 3. Helen was practicing for her Summer Mountain Leader and so took the opportunity to try out some of her rope skills. We moved up the slope at our own pace, following Ben’s lead for the most part but also discovering our own routes. It was great fun on excellent rock and we soon gained height. 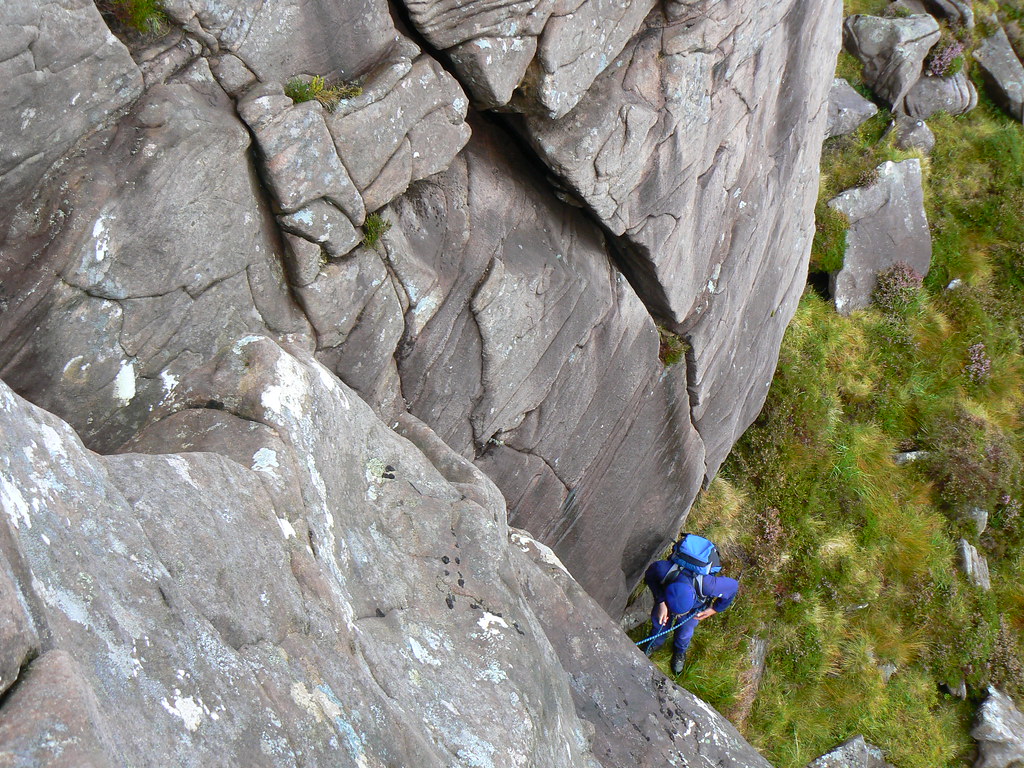 The weather continued to blow around about us but there were occasional views across the coires of Beinn Bhan. In particular our gaze was drawn south to the jumbled slopes of A’ Chioch rising darkly above the waters of Lochan Coire na Poite. 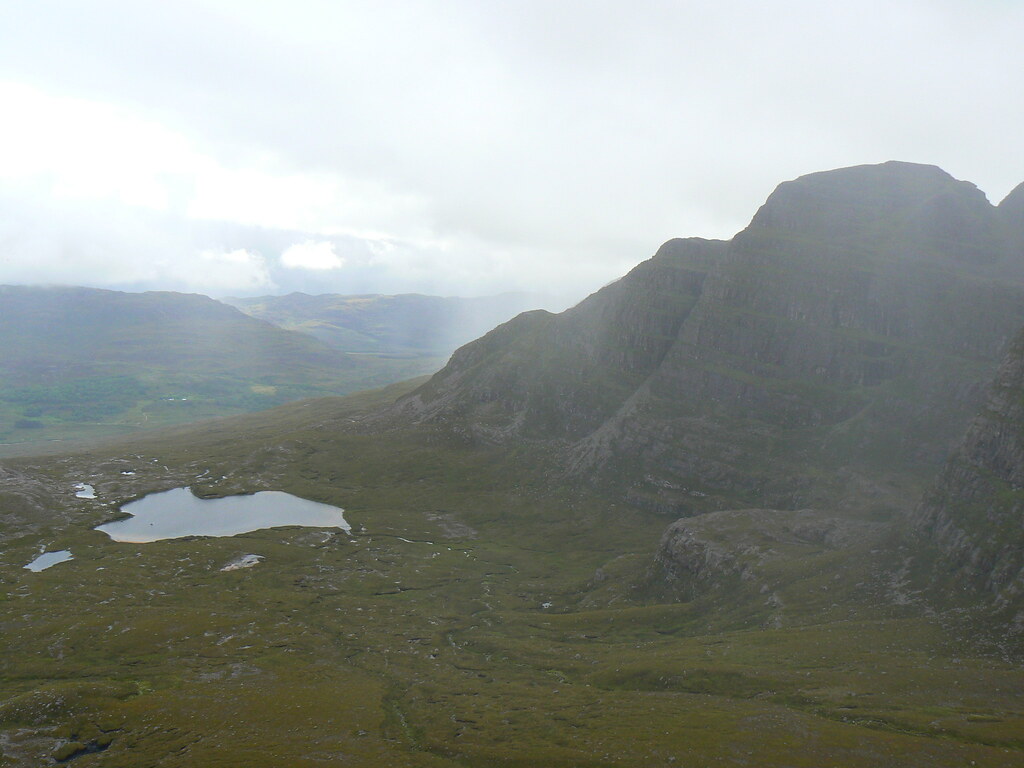 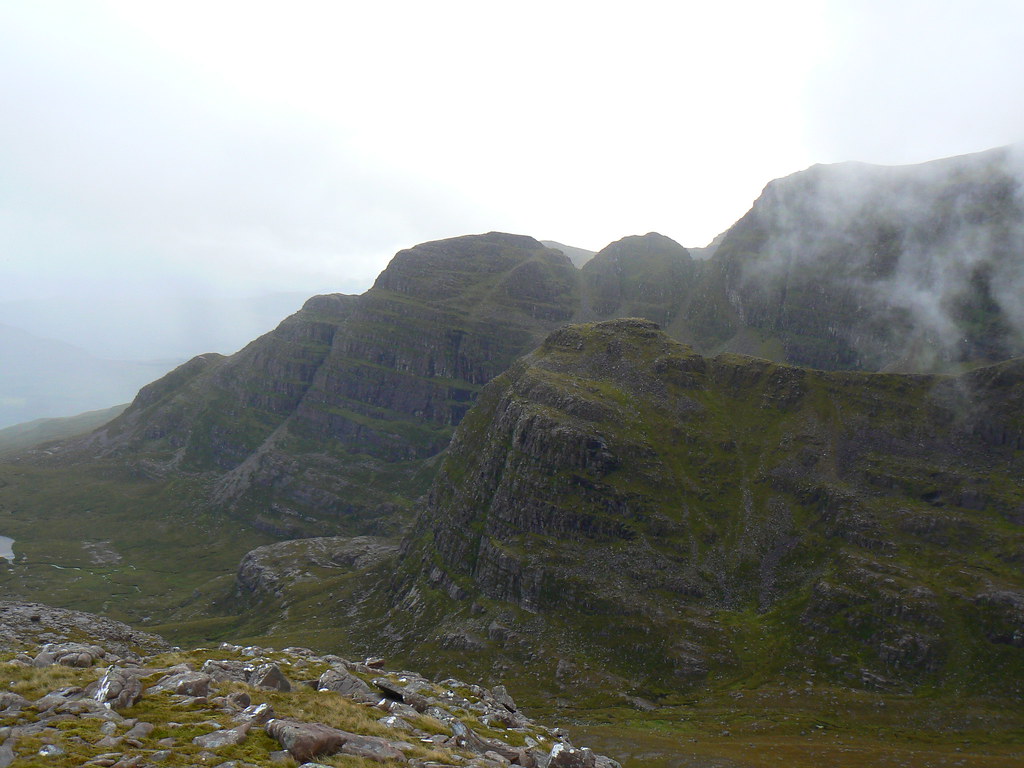 Eventually the scrambling was over and we came out on a misty plateau. We now followed a series of compass bearings and handrails to reach the summit trig point. On the way there was a brief lifting of cloud and we had dramatic views back along the rim of Coire an Fhamhair with Loch na Beinne Bain in the distance as well as the prow of A’ Phoit. 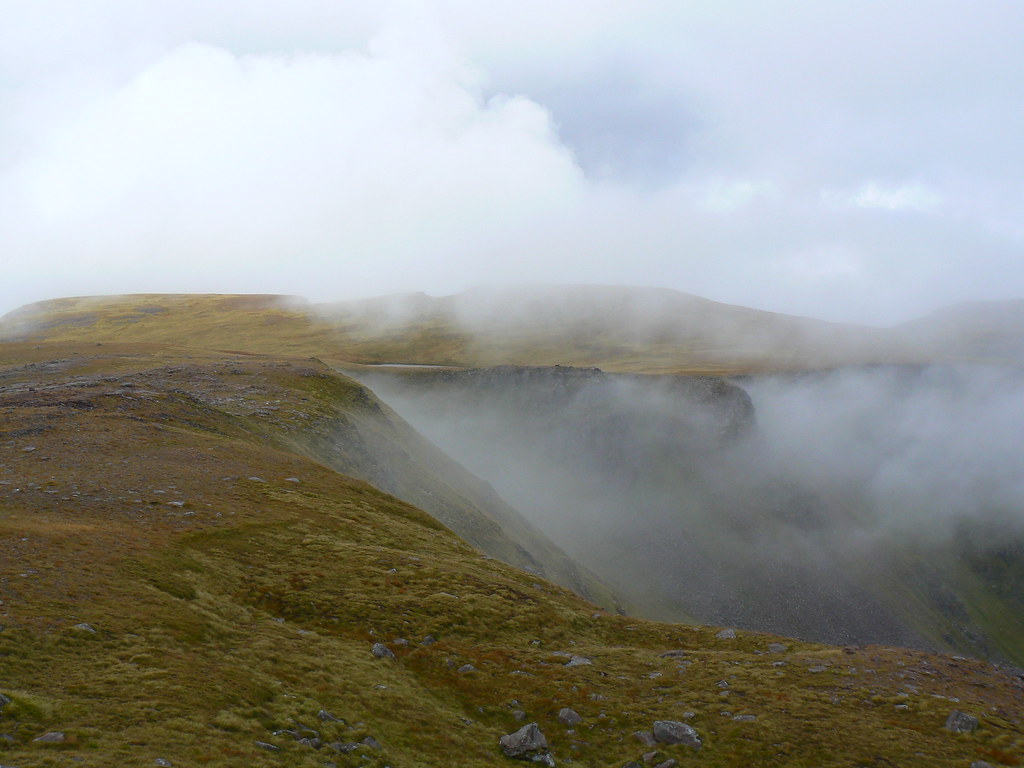 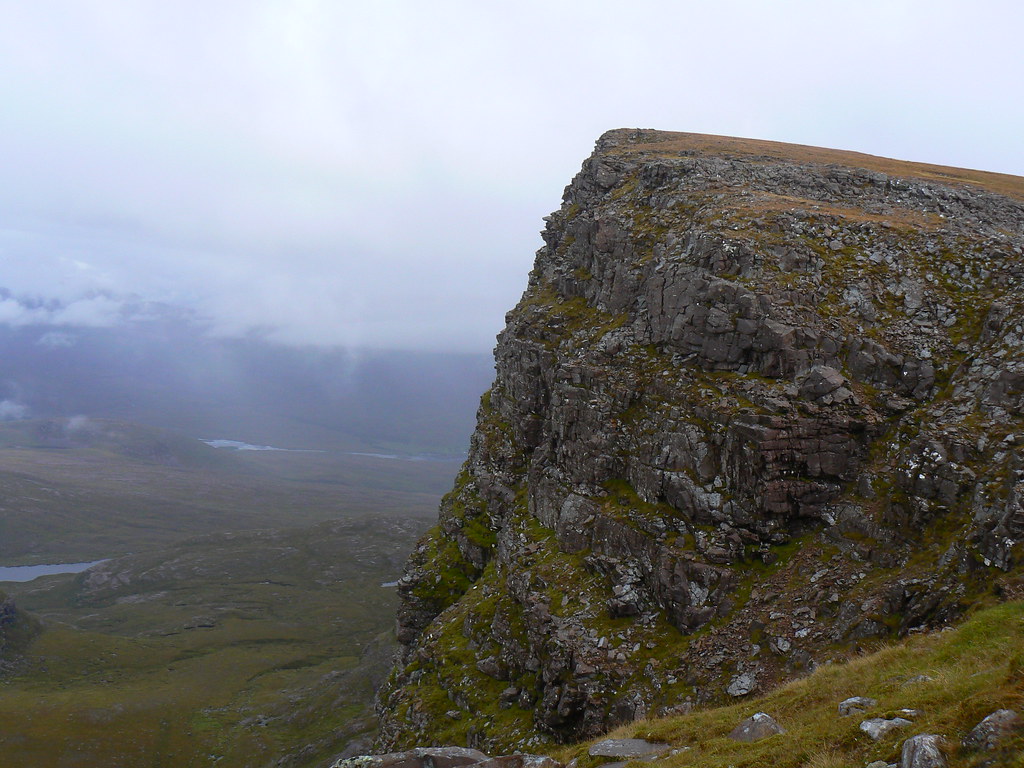 We reached the trig point in thick mist and stopped only briefly for a late lunch. The views reappeared as we dropped off the end of the summit plateau down towards A’ Choich and the continuation of the main ridge as it led us back towards Loch Kishorn in the distance. 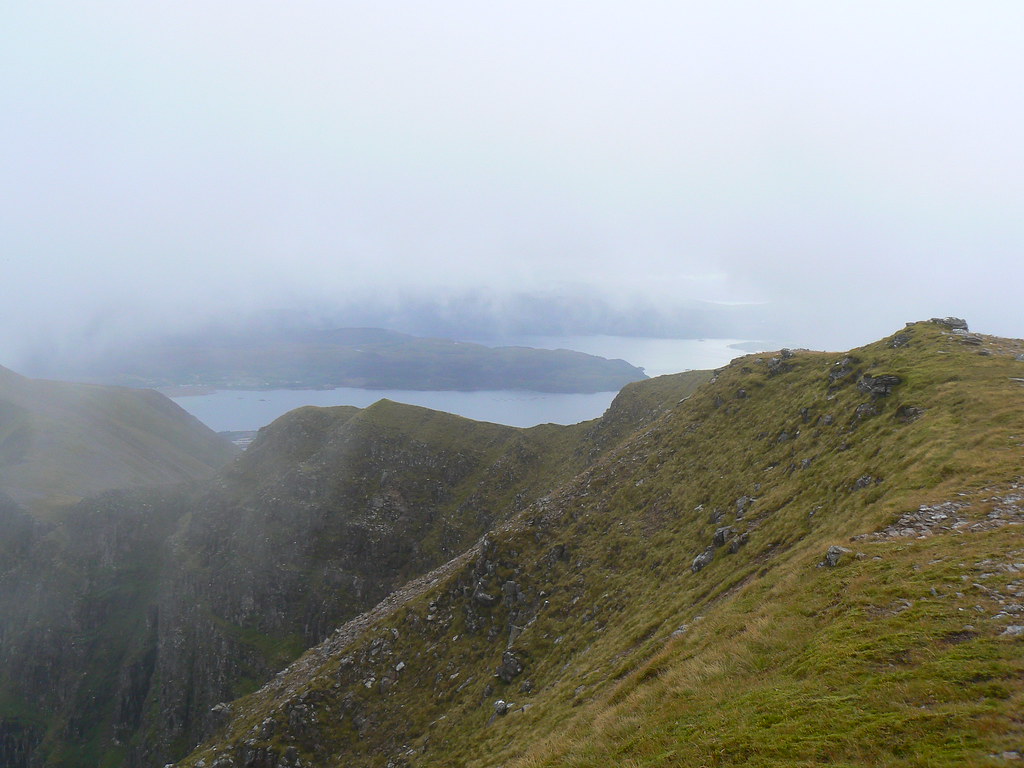 The ridge is magnificent providing comfortable, airy walking on short grass with only the occasional bit of rocky interest. The views came and went but generally improved as we dropped below the cloud base. Soon we had the wonderful view across Coire nan Arr to Sgurr a’ Chaorachain to admire. 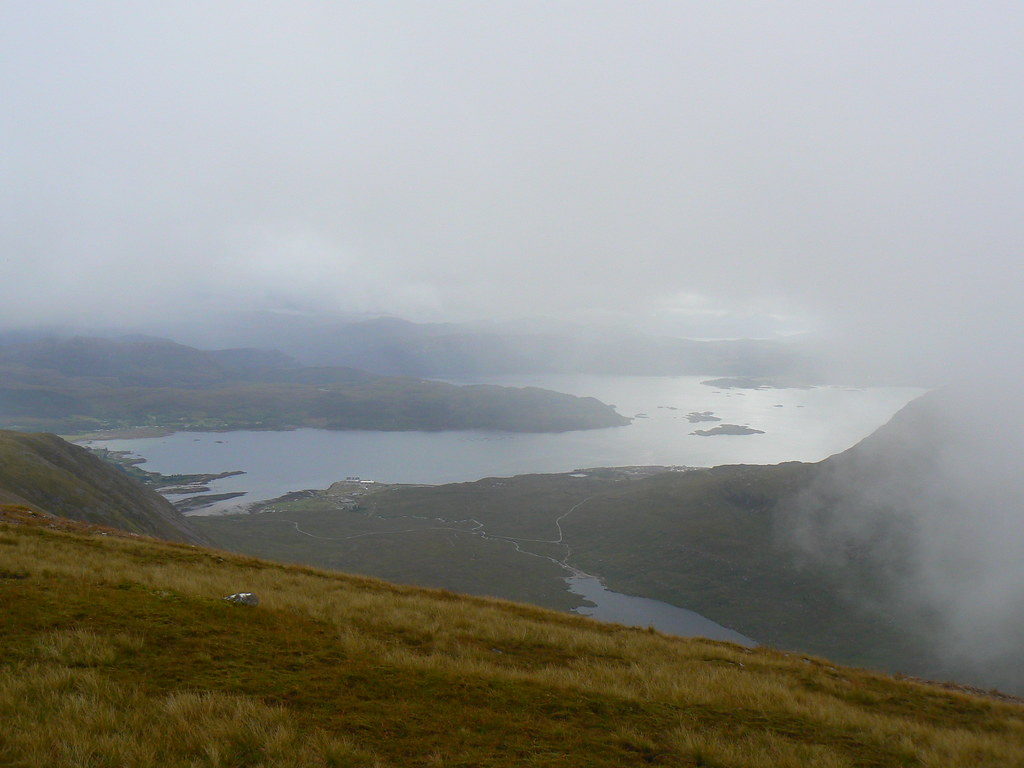 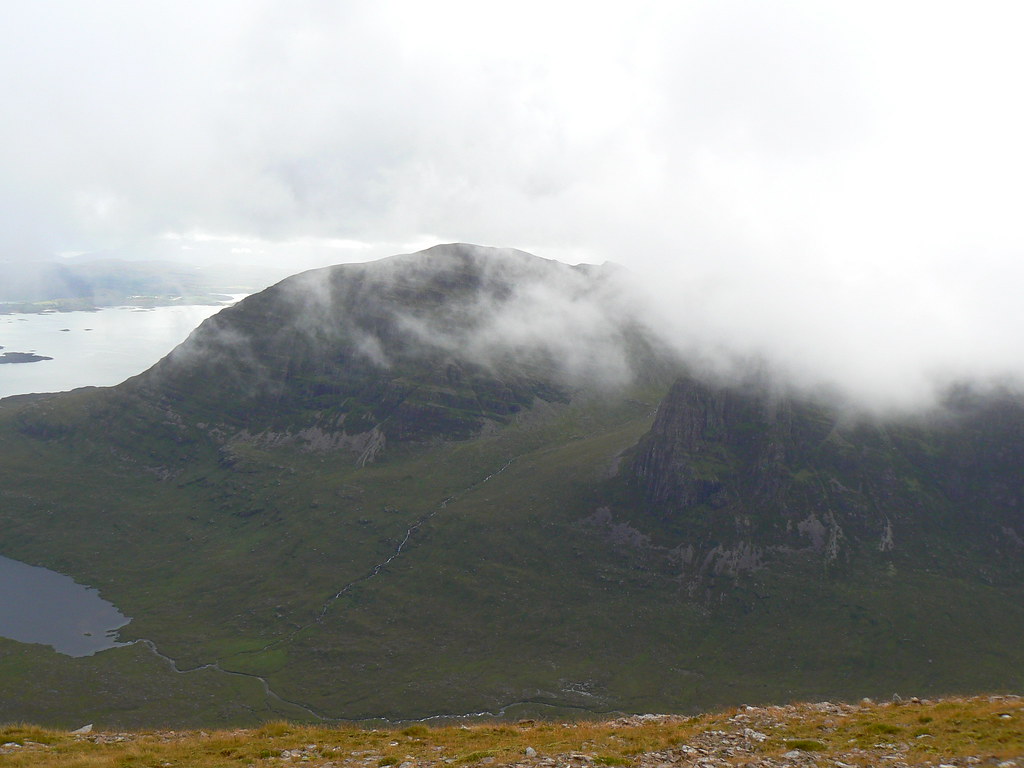 The ridge narrowed briefly for a time before we reached the southern end where there was more level ground and a last opportunity to admire the views. 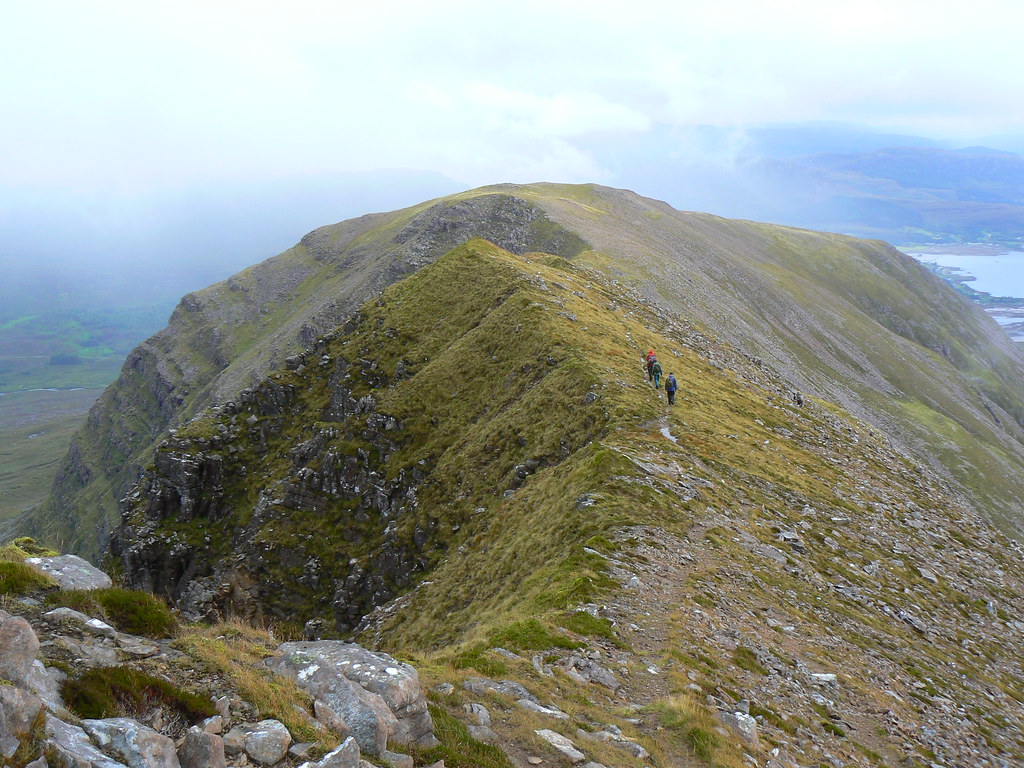 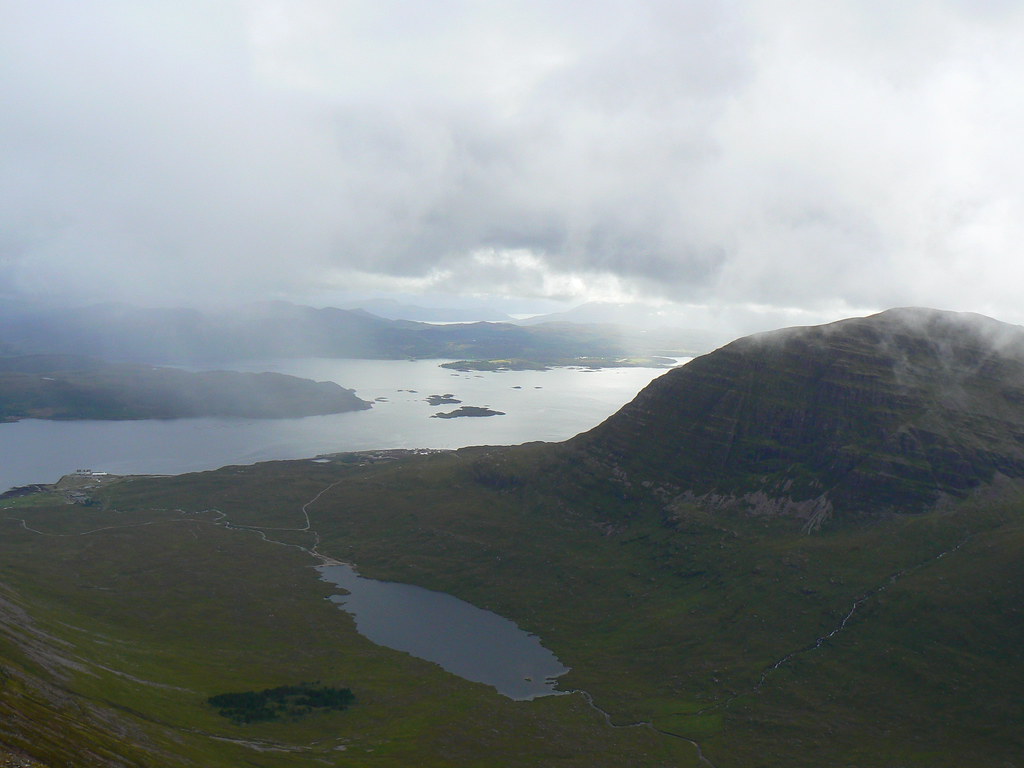 The views back along the main ridge and down the spiny arm of A’ Choich were quite spectacular as the cloud cleared and sun finally hit the hill. In the lee of the hill, sheltered from the wind and on soft turf it was very relaxed and we had a long break to enjoy the place. 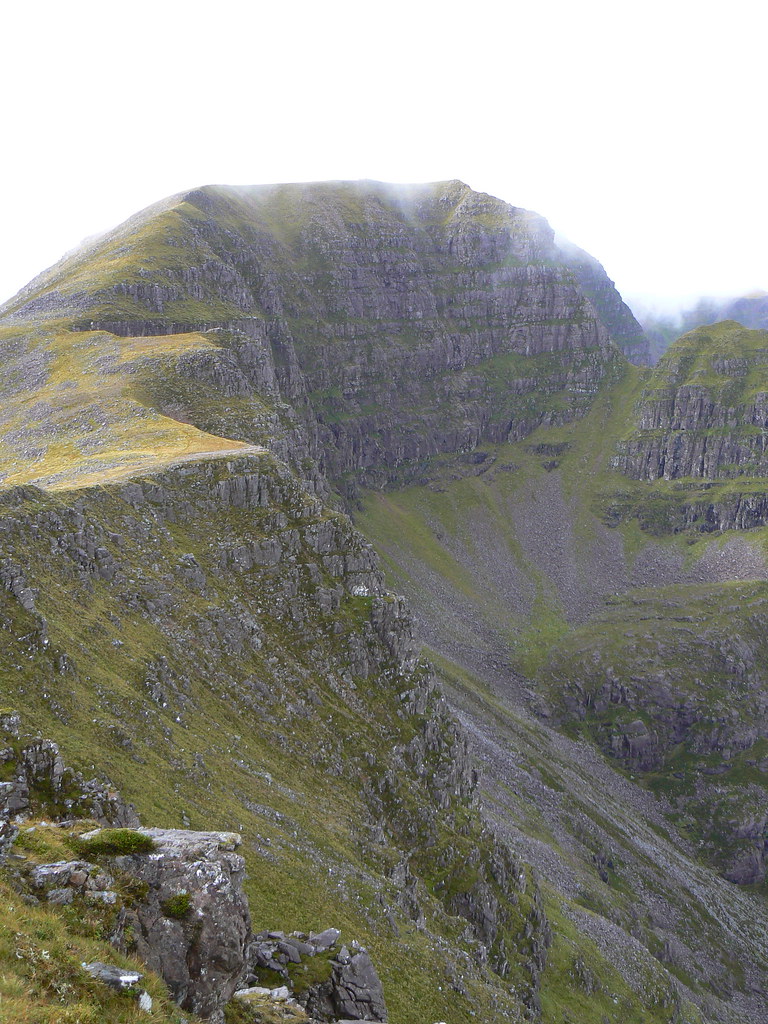 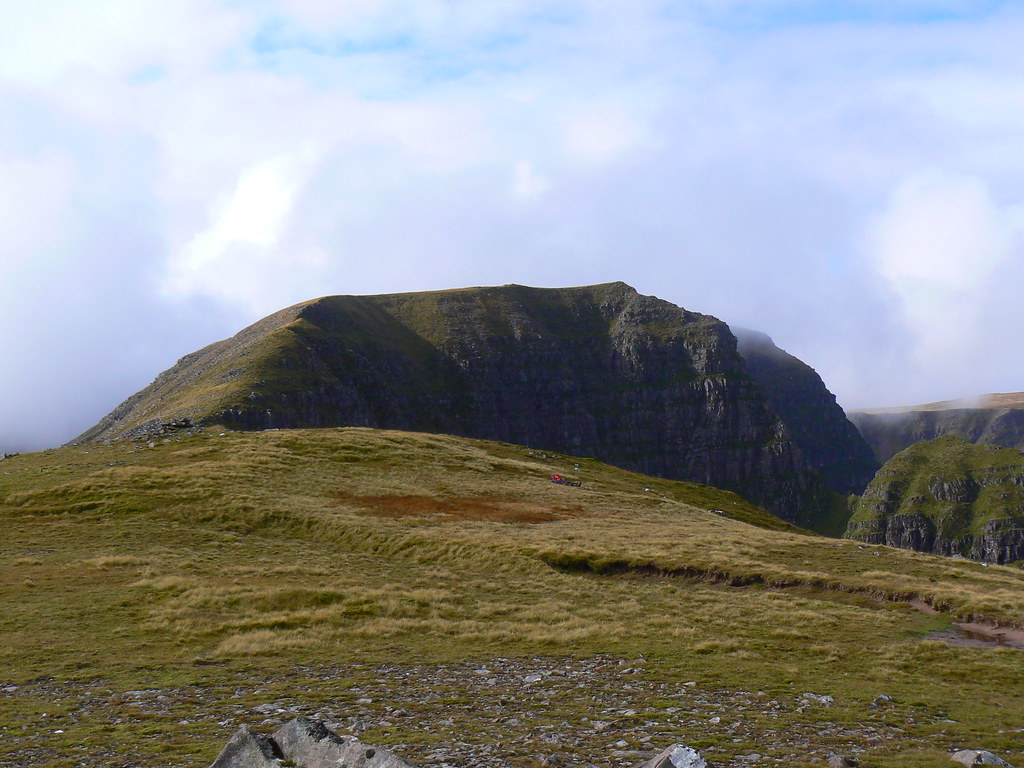 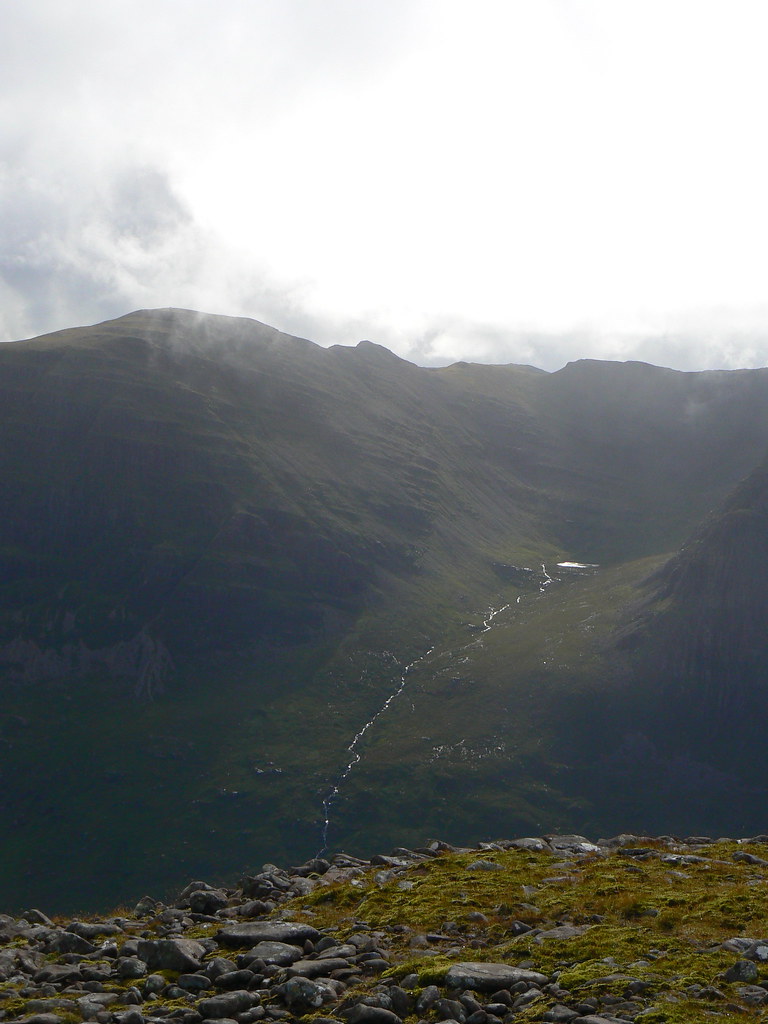 Eventually we tore ourselves away from this wonderful hill and started the long, steep grassy descent back to the River Kishorn and the van. There were excellent views across the head of Loch Kishorn itself and further off to the Torridon hills now clearing of mist and cloud. 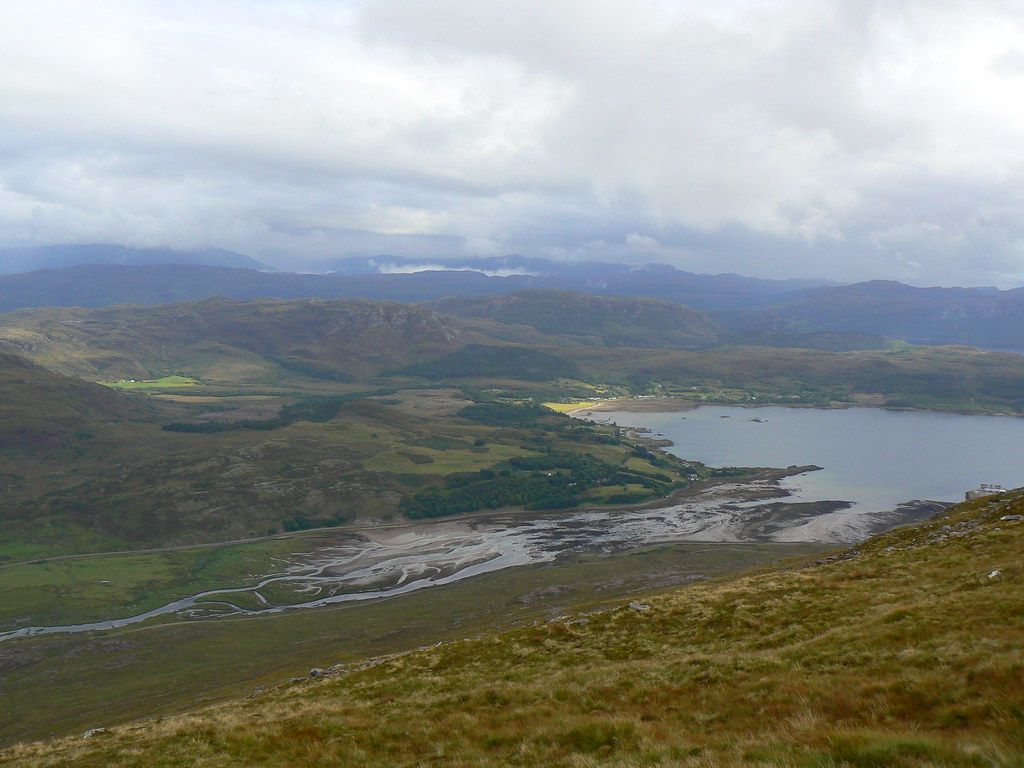 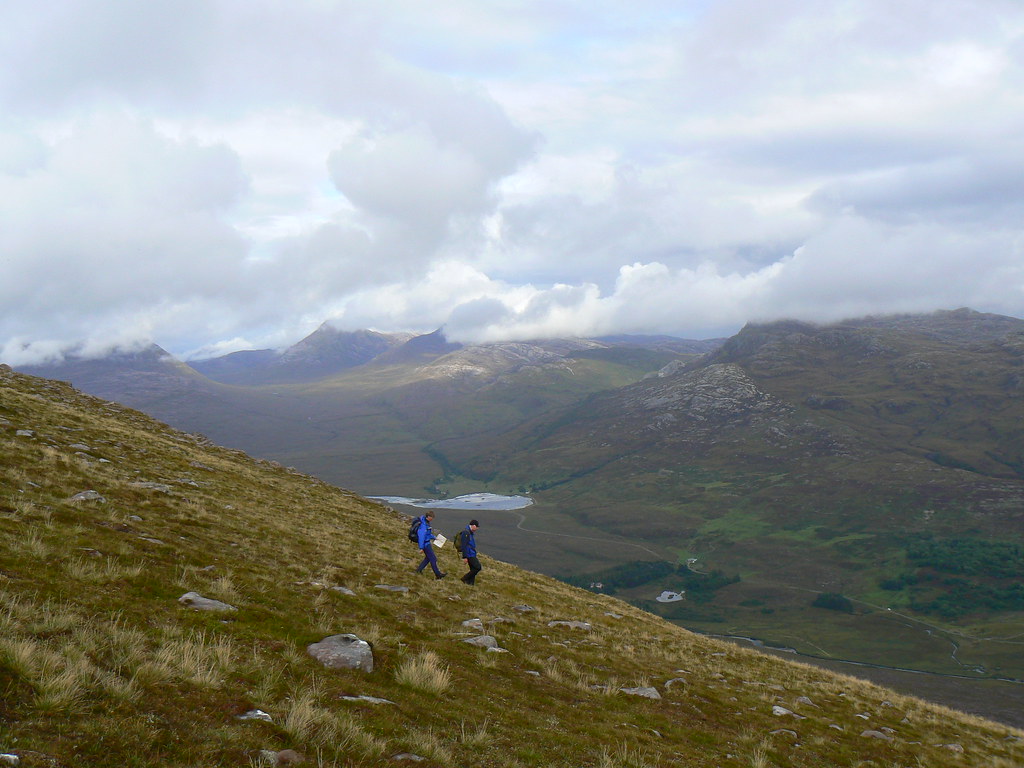 With the descent over we changed and piled into the van for a fun drive across the Bealach na Ba. At the top we stopped for the wonderful views out to Skye. Across the moor Beinn Bhan’s summit stood now clear of cloud. 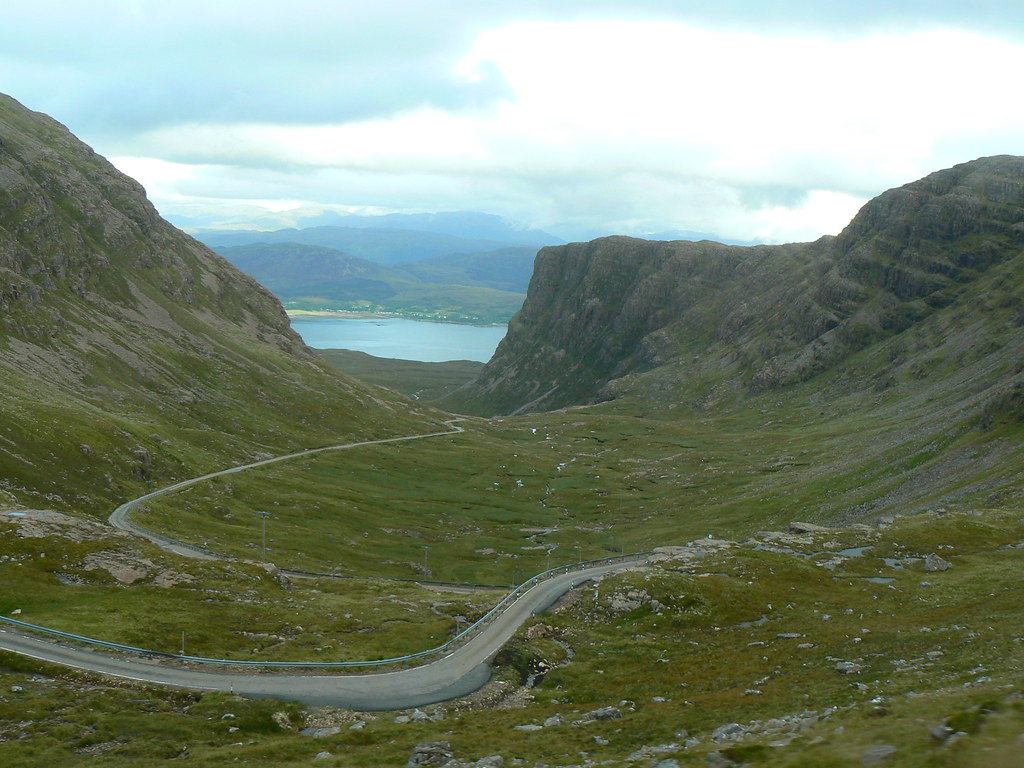 We drove down into Applecross to enjoy a grand evening, dining on fresh fish and chips in the Inn and then wandering along the rocky shoreline with views out across the Inner Sound to Skye. 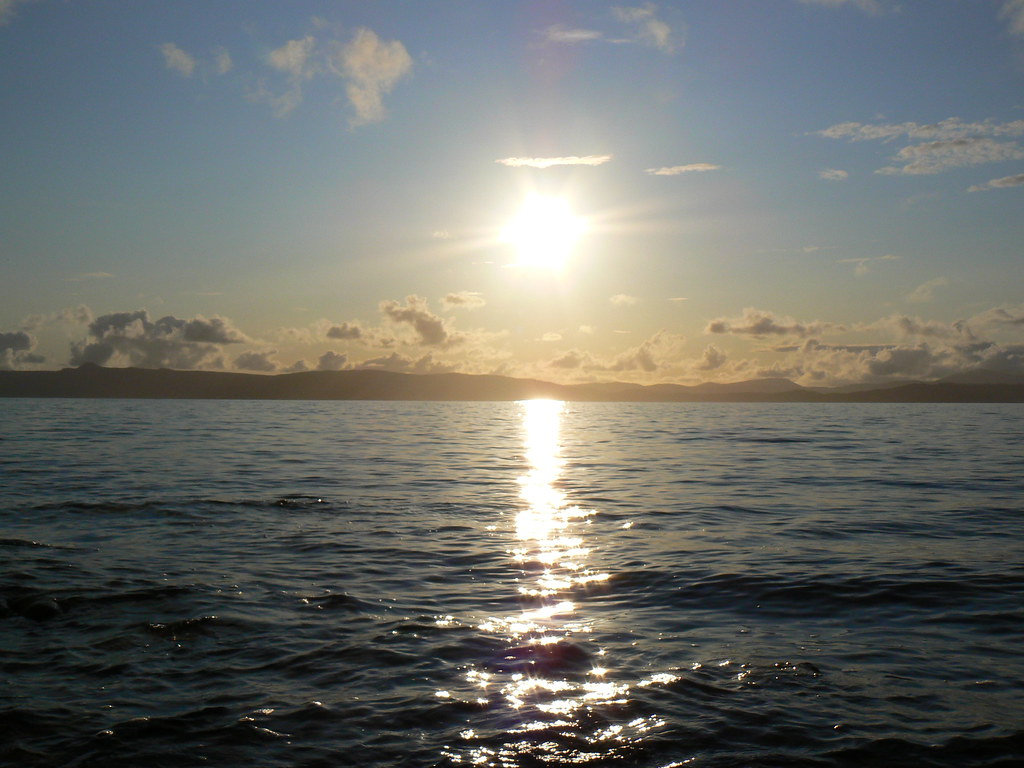 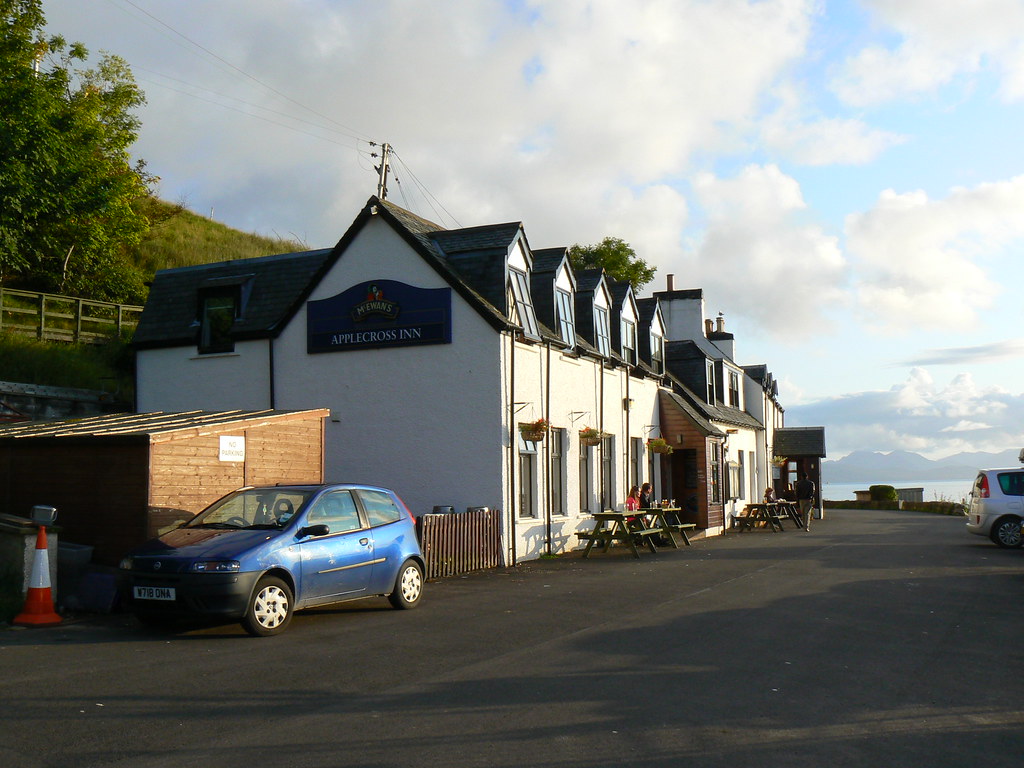