A short wintry hike over the hills of the Pitfichie Forest in eastern Aberdeenshire. 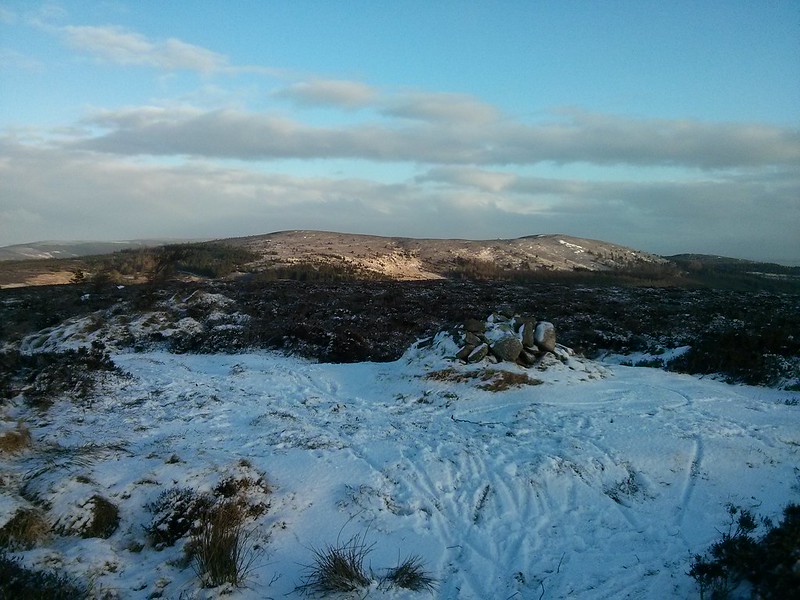 After some interesting maneuvers by the coach driver on the access road we were off the coach and heading up to the car park and then on to the start of the Pitifichie forest cycleway. Under a thin cover of snow this offered an easy walk uphill with just a couple of the more hardy mountain bikers overtaking us. 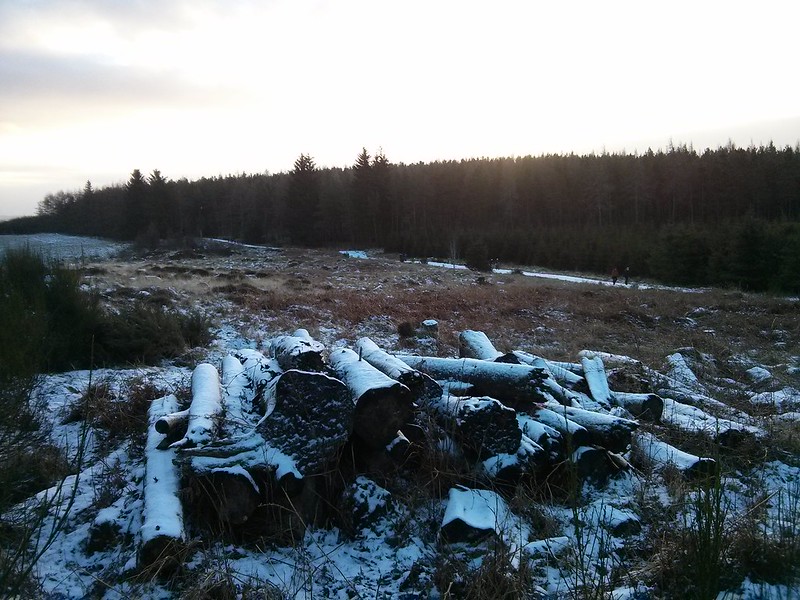 Under a brightening winter sky we followed the track up to the circle of stones near Whitehills farm. 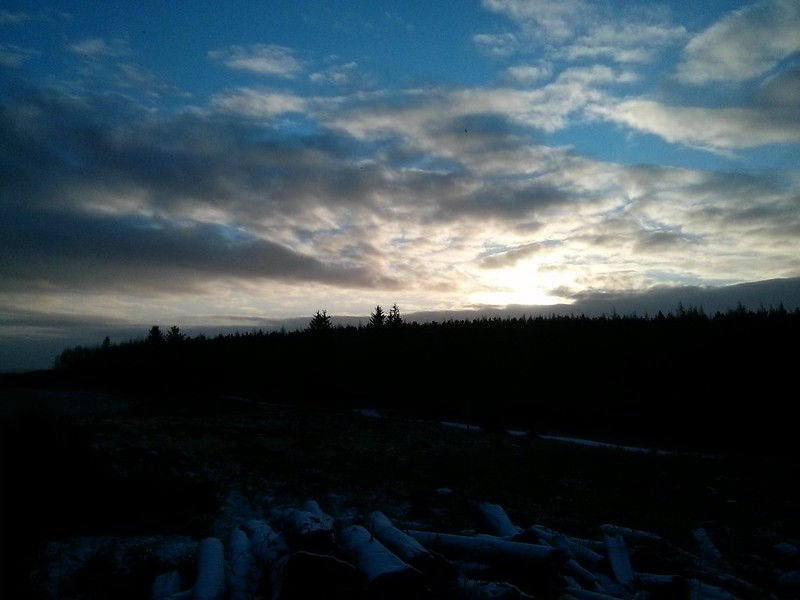 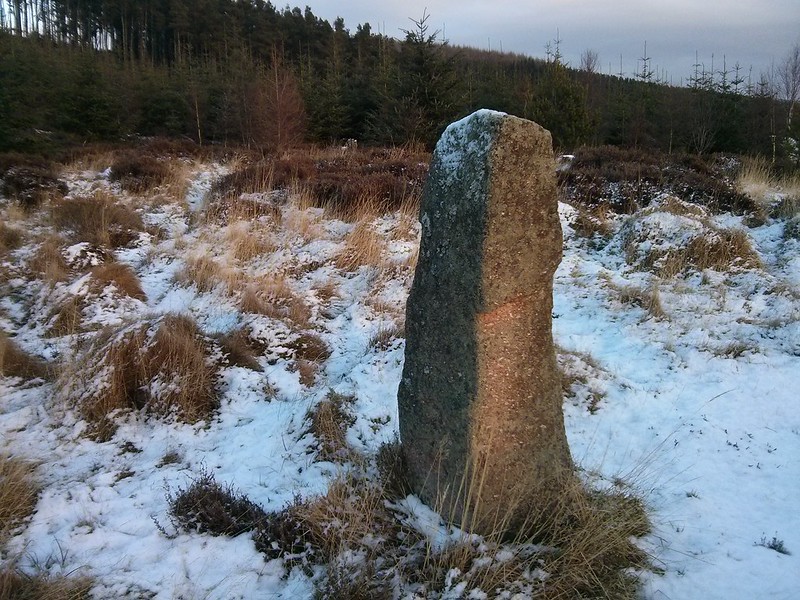 The sun was rising over a hazy scene of fields and woods as we followed the cycle track around a corner and up to a branch where a minor path headed off towards Green Hill. 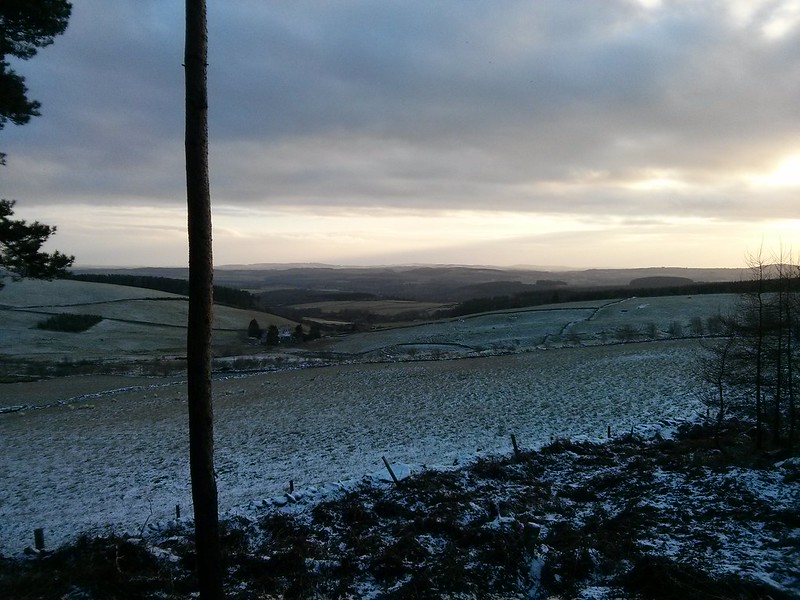 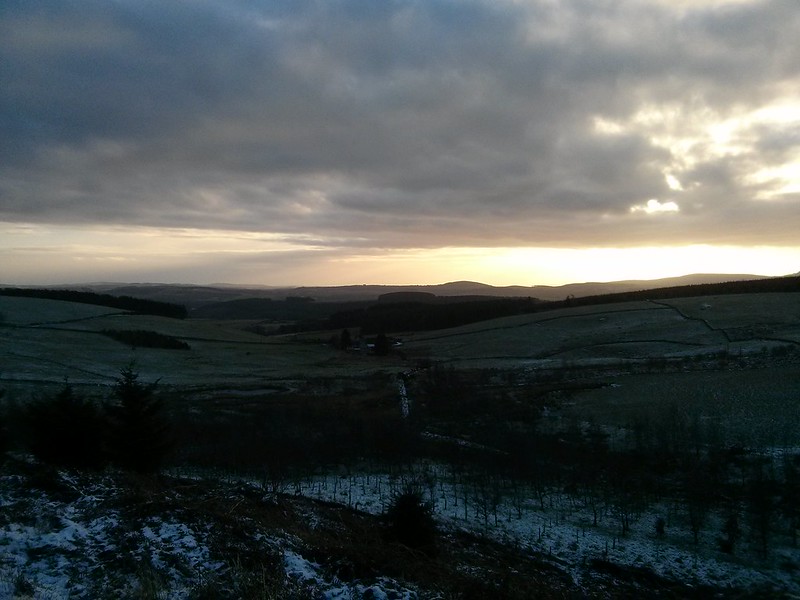 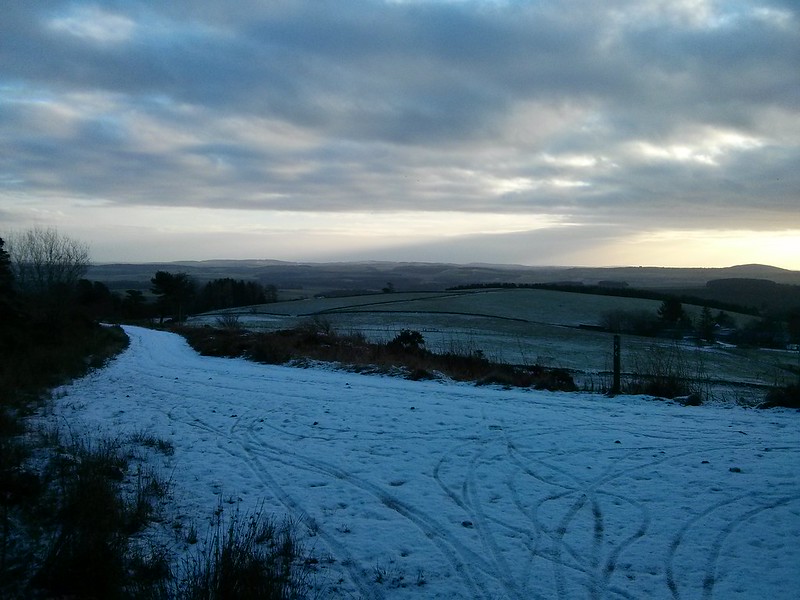 We wound our way on a pleasant track up through the woods enjoying the increasing sunshine as the cloud broke and disappeared away to the east. We arrived at the summit of Green Hill just as the sun made a final determined appearance, lighting up the long ridge of Cairn William and the whole of Vale of Alford spread out below us to the west. 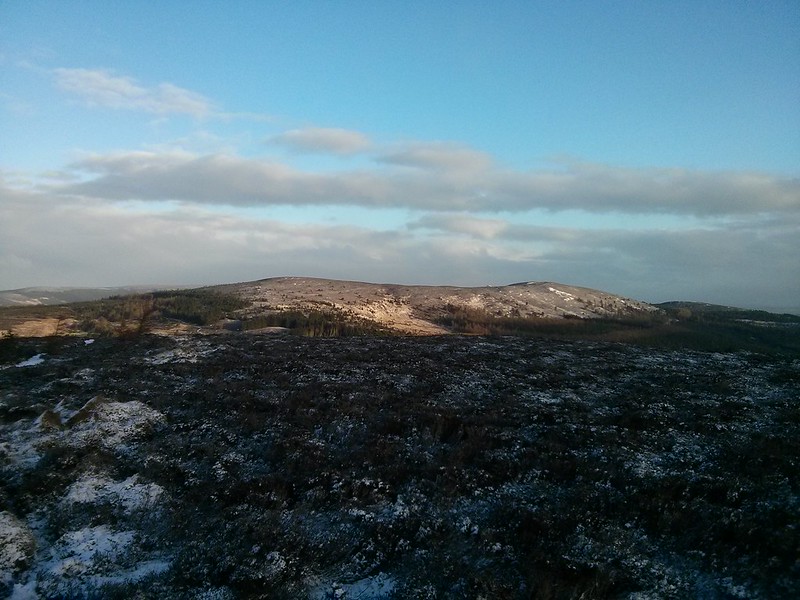 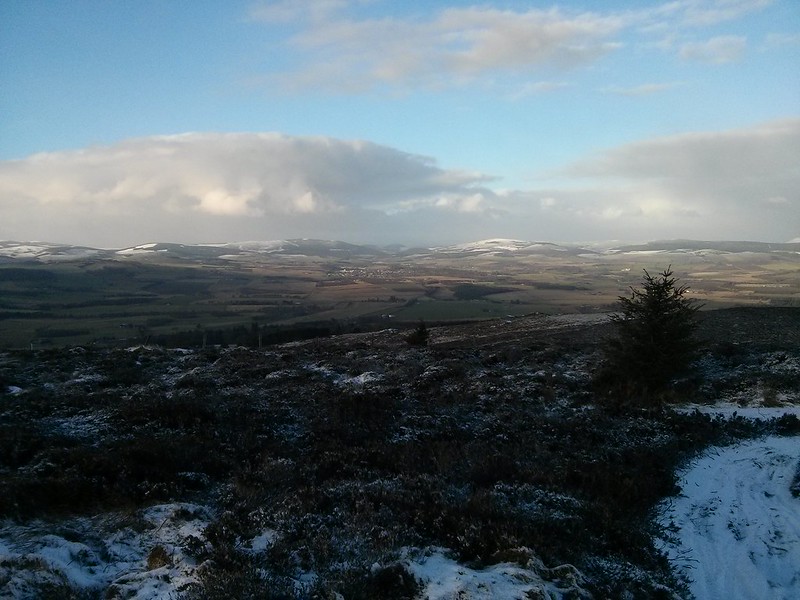 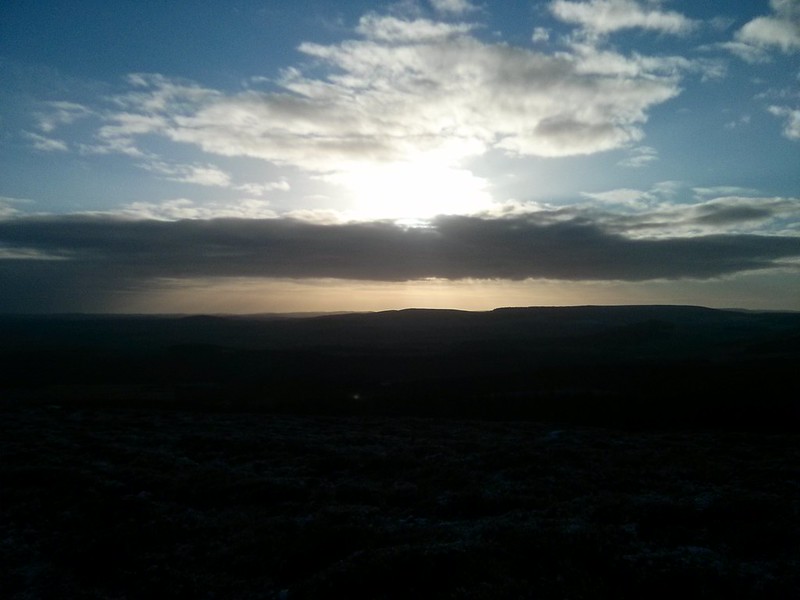 The path continued beyond the cairn and offered a fun descent as it followed the contours of the hill between stretches of heather and small conifers. 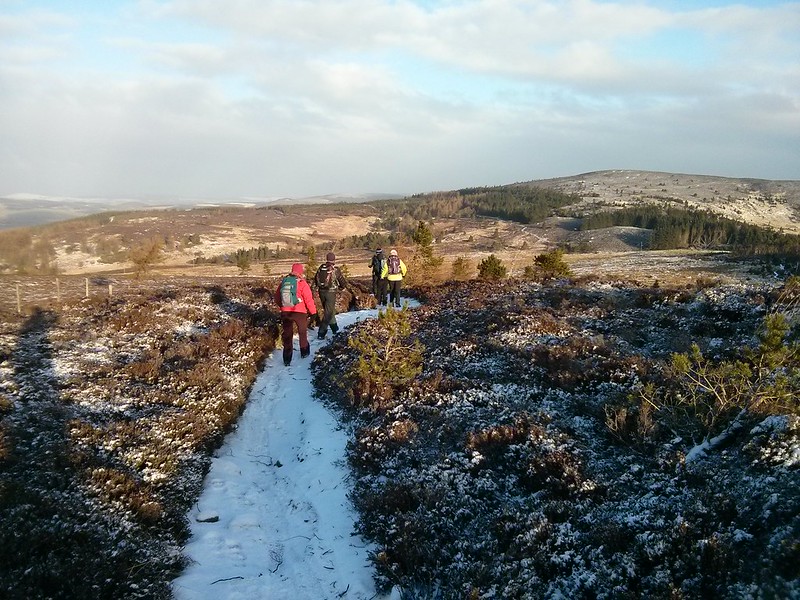 We stopped for a longer pause in the shelter of the trees back on the main cycle track. The blue skies looked to be shortlived as large snow-carrying clouds now appeared in from the west. 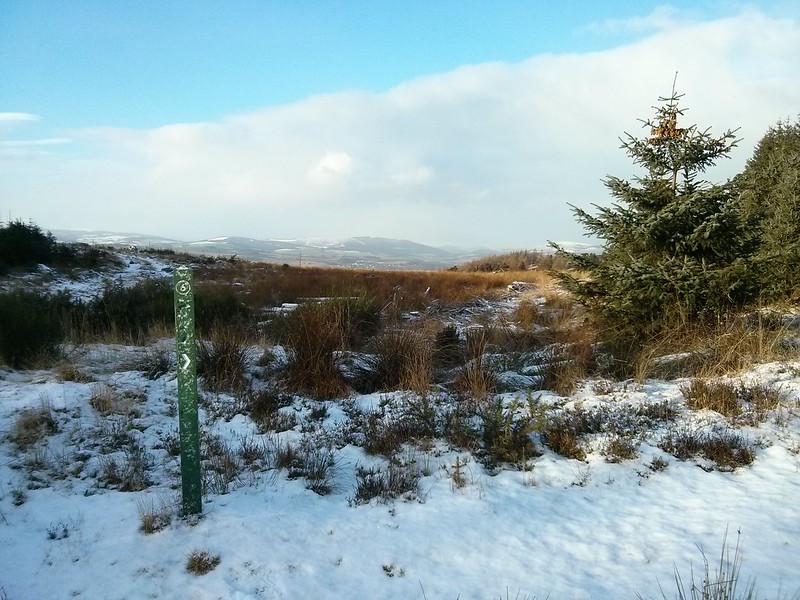 We followed the main track through the forest, climbing up through the dense pines as snow started to fall heavily. It was a magical atmosphere though hoods were pulled tight around faces as the headwind blew flakes straight into our eyes.

At a turn off we left the main track and started the enjoyable climb up to the ridge of Cairn William following another well constructed cycle track. 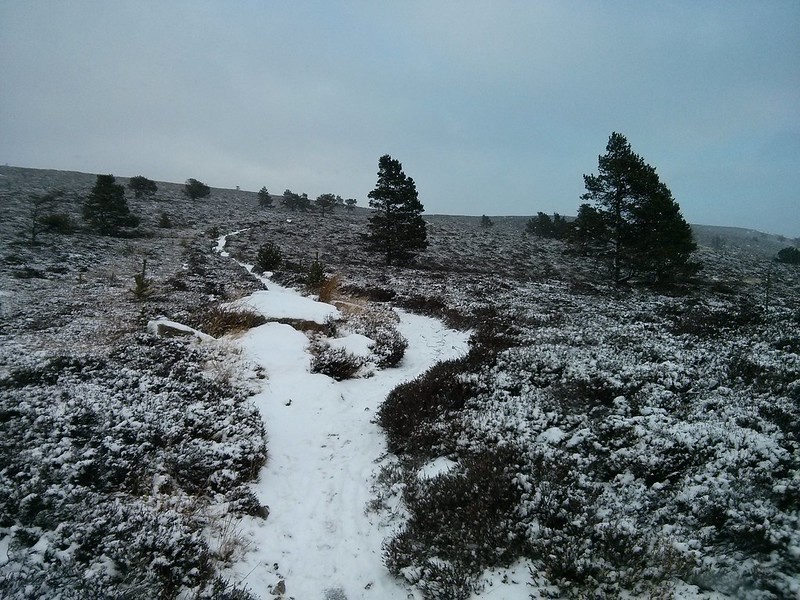 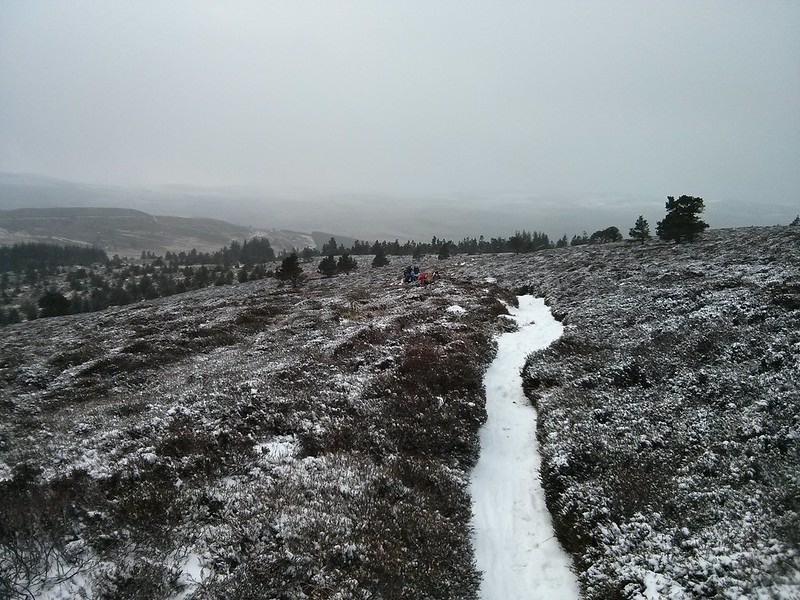 As we gained height the snow eased and blue skies appeared again. 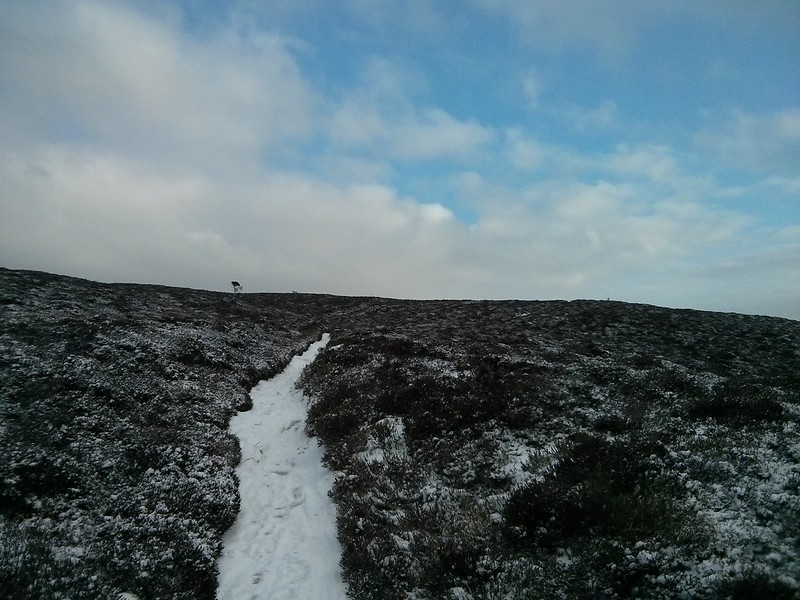 There were dramatic views across the lower Aberdeenshire countryside as rays of light broke through the slow moving clouds.

We emerged onto the broad-backed Cairn William ridge and were immediately greeted by the sight of Bennachie, its flanks fletched with snow. 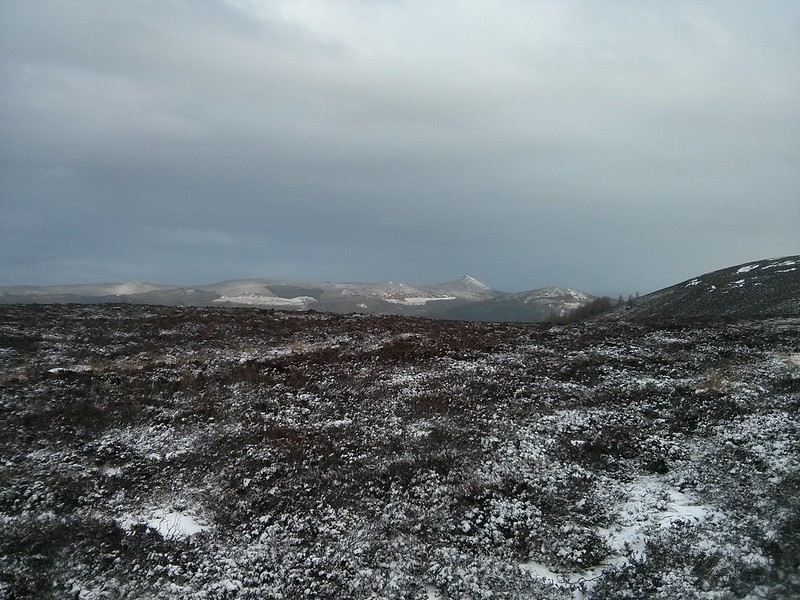 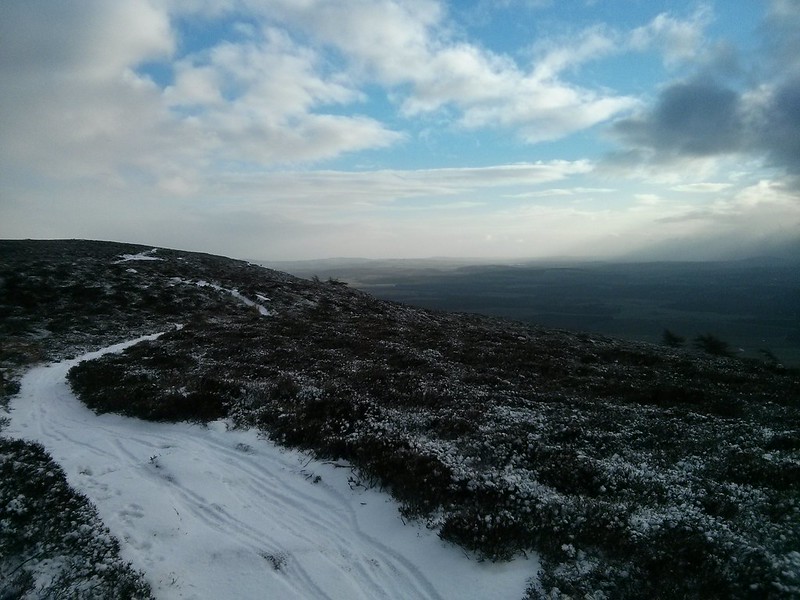 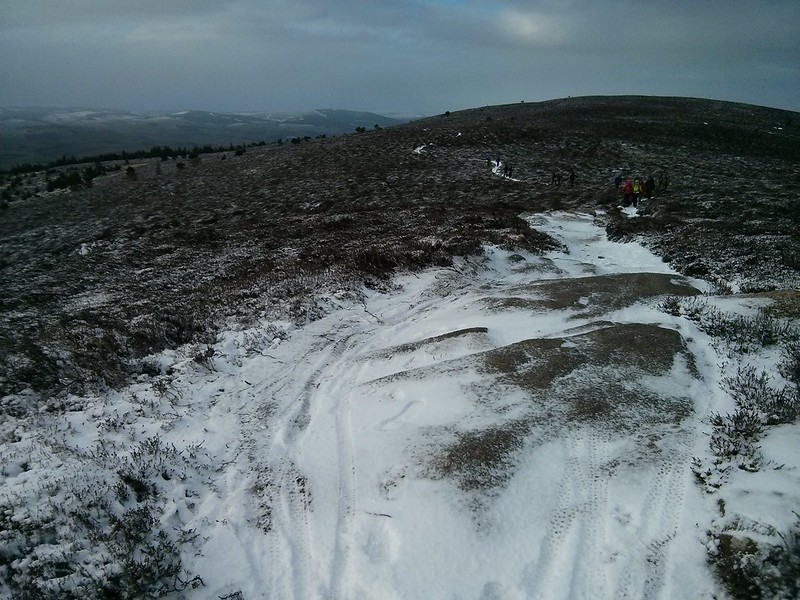 The ridge path was easy to follow, though there a couple of slips as below a thin layer of ice the path had been turned into a glassy stream of thick, hardened and polished ice. More often than not it as safer walking in the heather, especially when we got to some of the broader granite sections. 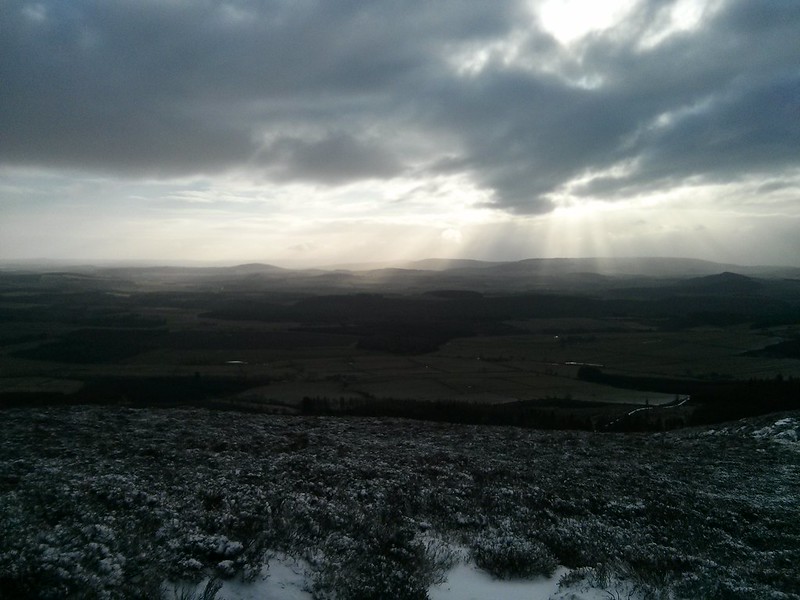 We slipped and slided our way along to the summit where a wide expanse of glassy rocks is supplemented with a trig point. The views were excellent from the top and there was an opportunity to regroup as folk looked out towards the surrounding hills and down towards a hazy Aberdeen off in the distance. 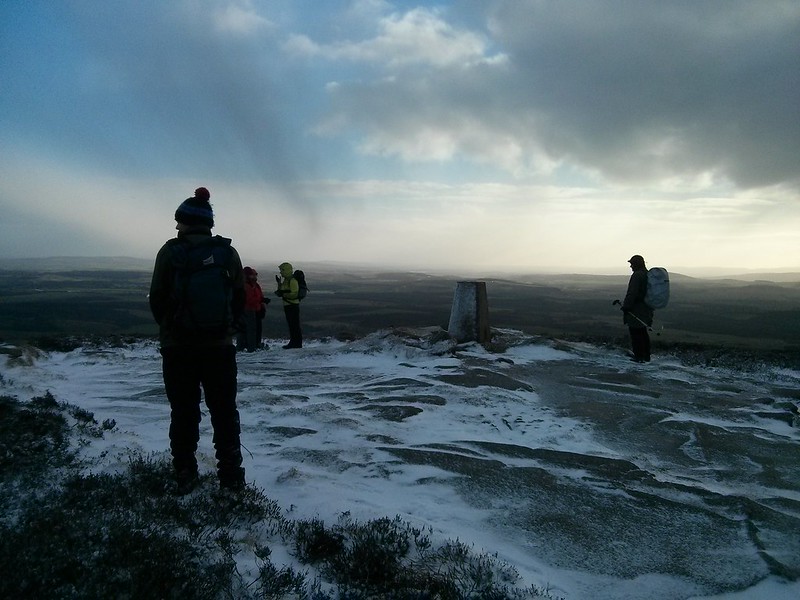 The track zig-zags its way downhill but given the continuing presence of glassy ice we chose to cut straight downhill to rejoin the main cycle track below Pitfichie Hill. Here a few folk stopped for a break whilst the rest found the junction up Pitfichie and headed for the top. 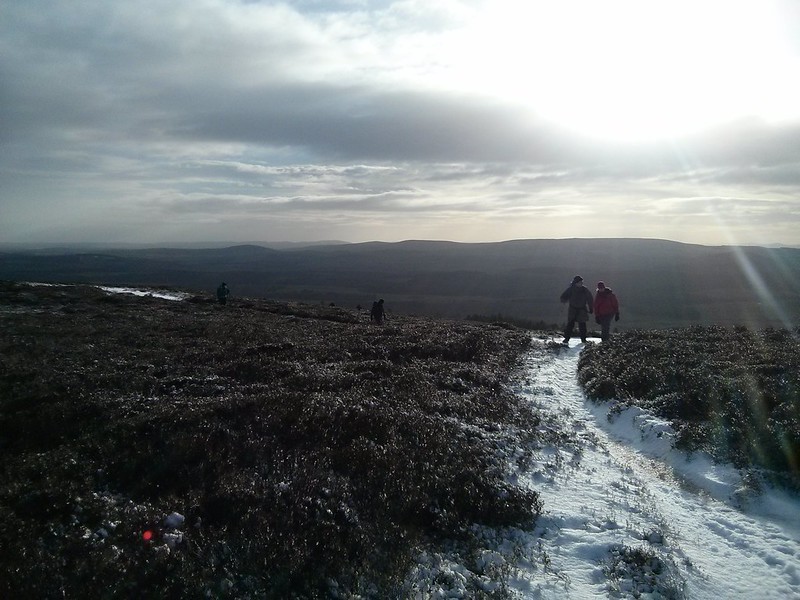 We left beyond the marker and headed up the final short plod to the summit of Pitfichie Hill where there were expansive views all around, back to Cairn William and further off to the hills of Aberdeenshire. 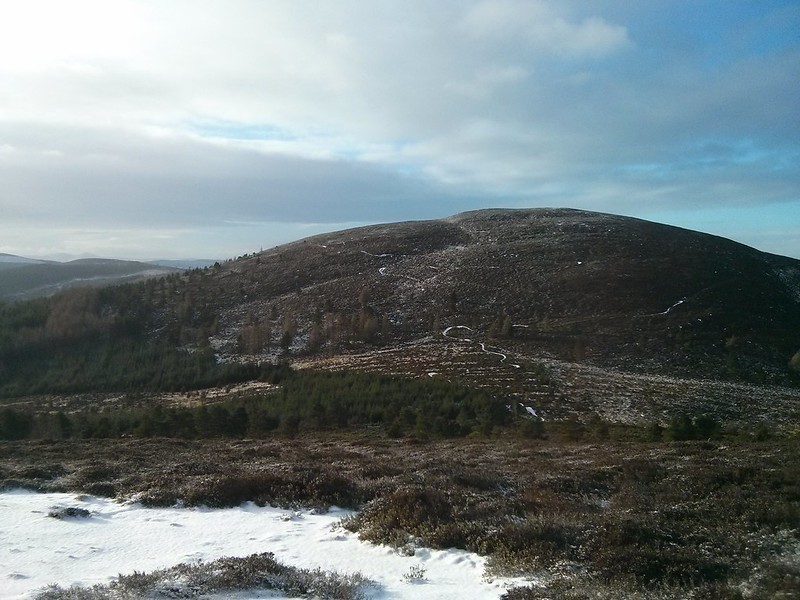 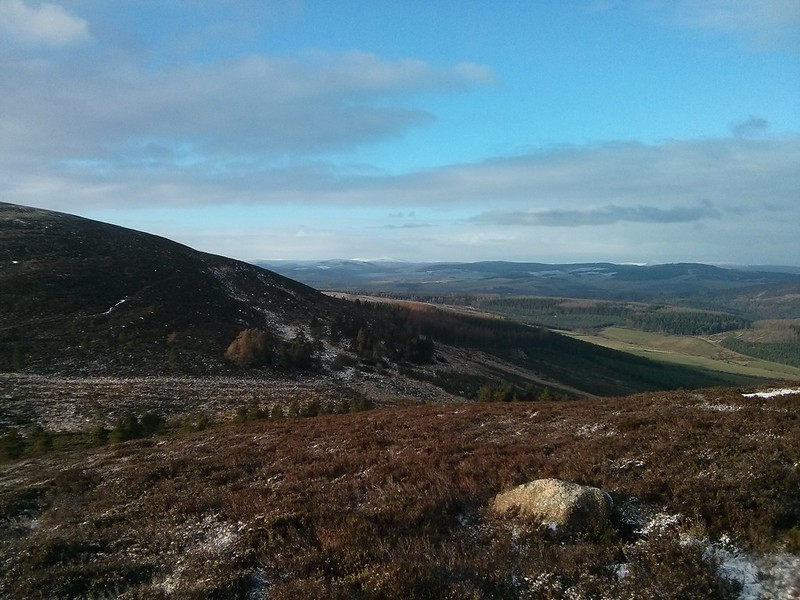 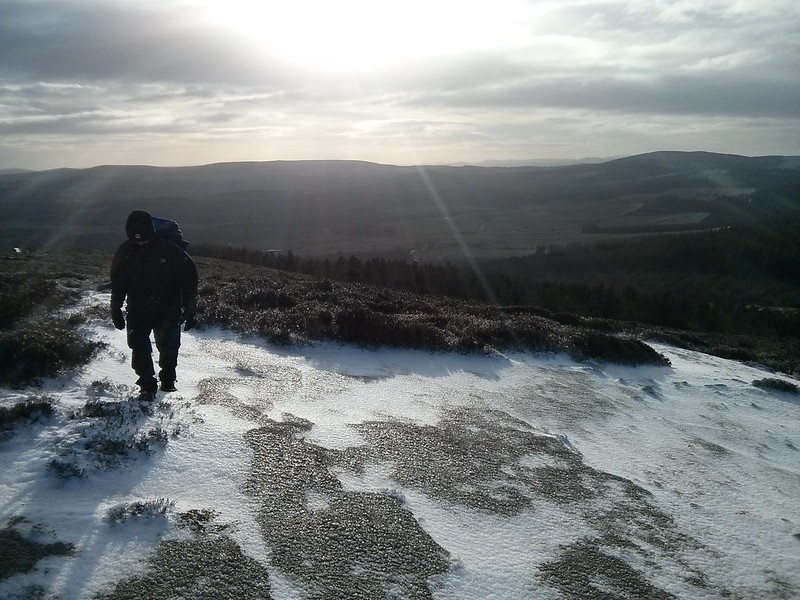 The summit was once again more like a skating rink so after pausing for the view and photos we headed back the way we had come, making a rapid descent to the cycle track and then following it northward to a point back in the trees where we stopped for lunch.

Though there was sunshine during the lunch break as we were moving off the light dimmed and we were once again under cold grey skies that, as we headed round the east side of Pitfichie Hill, turned to snow. 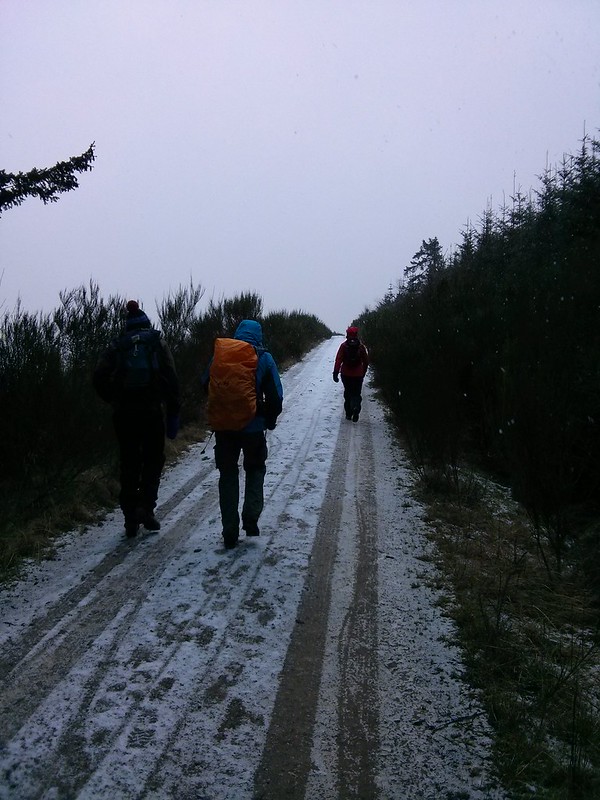 There weren’t many more pauses now and it wasn’t until we had threaded our way down to the road near Monymusk that the sun came out. We trooped down the short stretch of tarmac into the village where there was a hospitable welcome (and Deeside Brewery ale) at the hotel there. A very enjoyable winter day out on a pleasant little cluster of local hills.