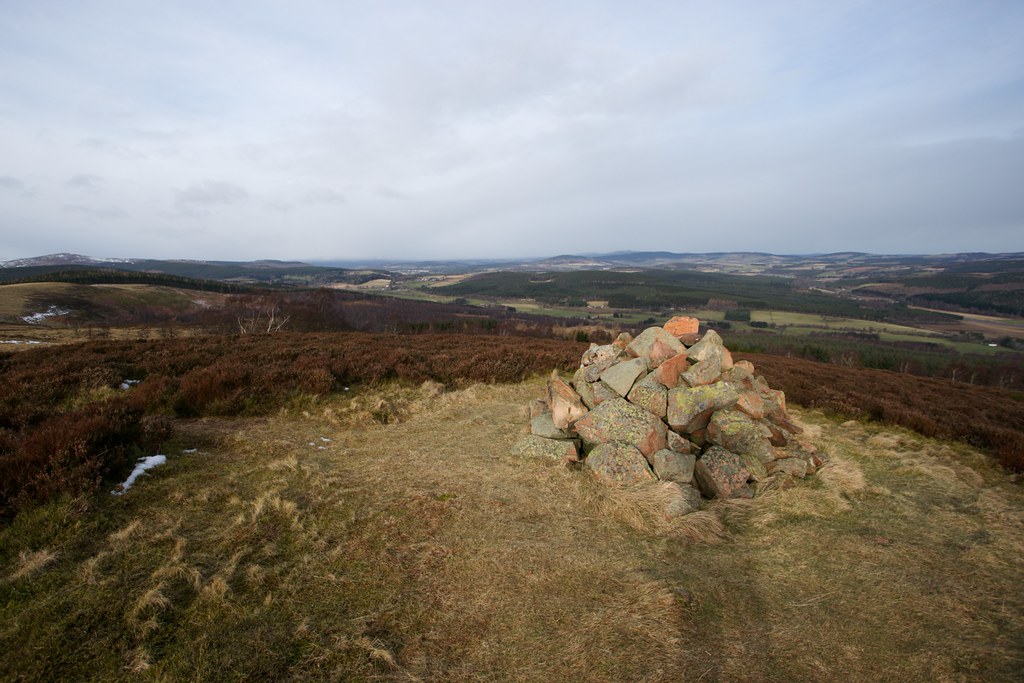 Other than a stroll on the North York Moors at Christmas and a quick wander around Glencoe Lochan back in January I've had a fairly quiet winter walking wise. Weather and general busyness have both got in the way of outings and so this weekend I was determined to get out into the countryside.

To make it easier I headed just a few miles outside of Aberdeen to the small village of Finzean on Feughside. This sits between Deeside and the eastern end of the Mounth hills. The last time I'd been there it had been a dire January day when an easy sounding stroll up Peter Hill turned into an Arctic epic as high winds and snow forced us to beat a hasty retreat.

This time the conditions looked somewhat calmer and I put together a pleasant circuit taking in a hill on each side of the Feugh with some forest walking and using minor farm lanes to complete the loop. 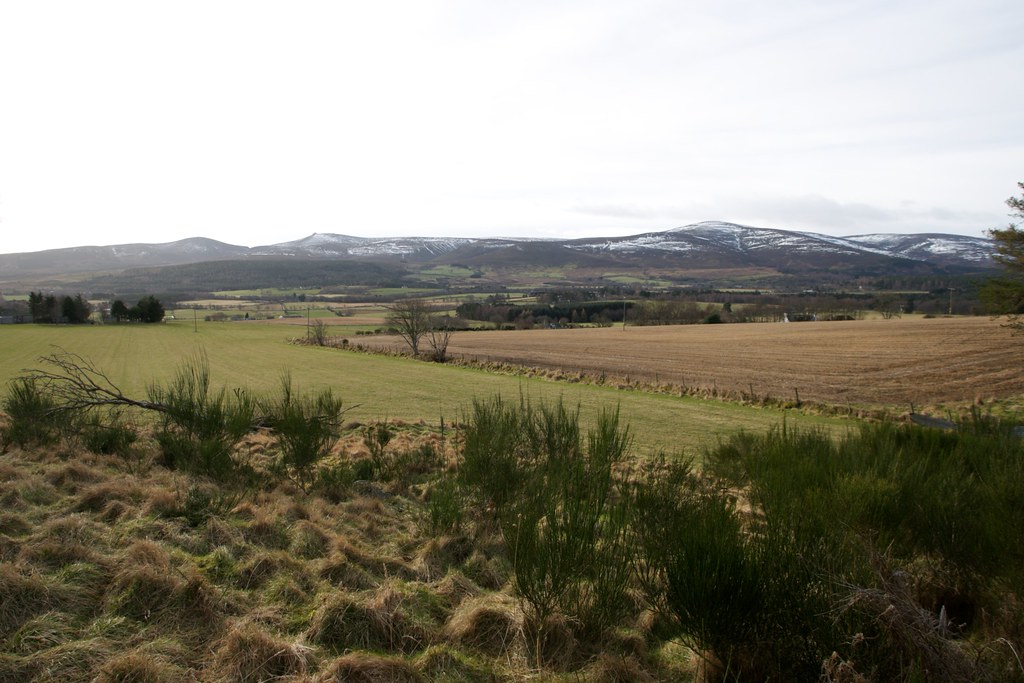 I started by parking up at the end of farm road leading to Tillycroy, a short way above the village. This gave me an easy start up the sign posted path to Tom's Cairn. The sun was shining and across the Feugh Clachnaben and Peter's Hill were streaked with snow. Further west the clouds were heavier and darker. The path was excellent, winding around the edges of fields, through a small wood and then up onto the crest of the hillside just west of Tom's Cairn. 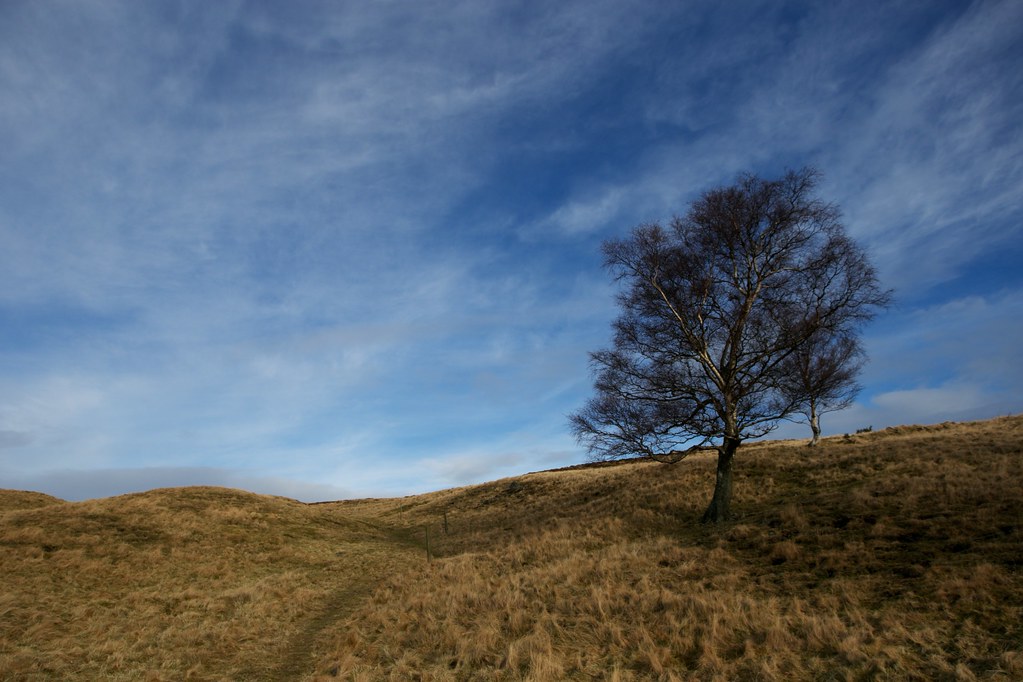 A grassy path took me up to the summit where there are cairns and a trig point and excellent views along Upper Deeside from Potarch Bridge to the high-rise flats of Aberdeen. 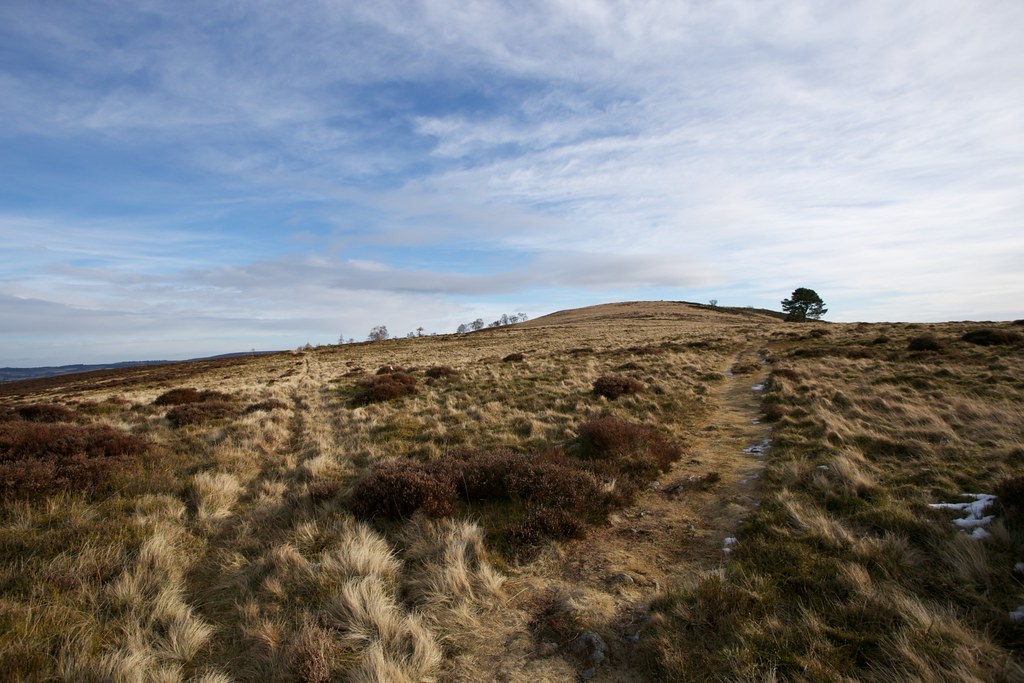 It was pretty blustery so I sheltered behind the northern cairn for a quick cuppa, enjoying the expansive views. Snow showers were troubling upper Deeside and it looked like I had made a good call to stay east. 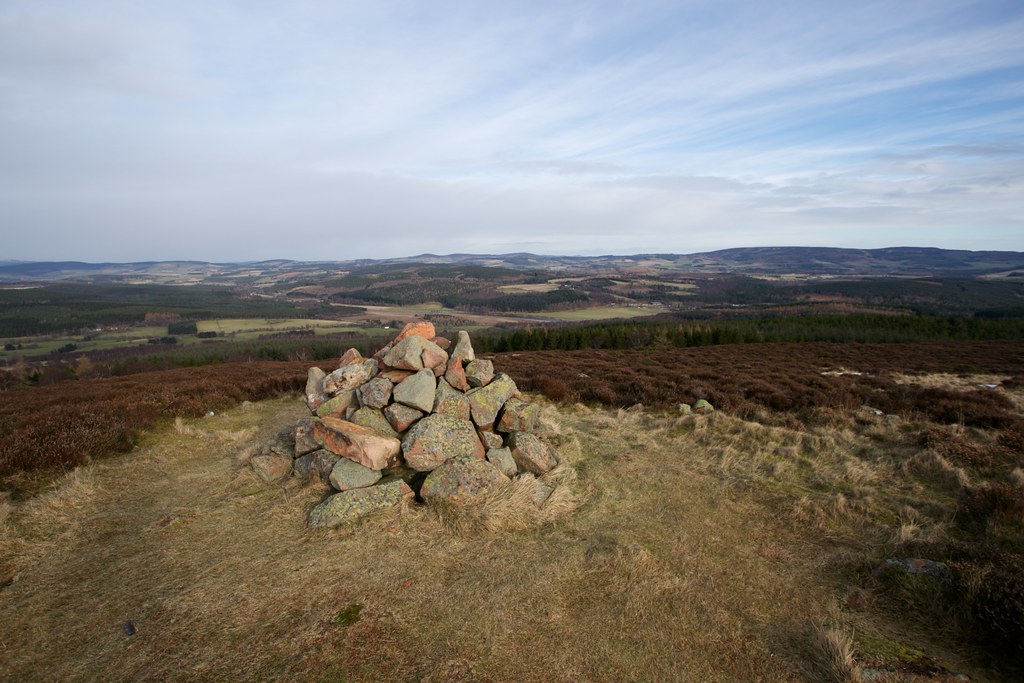 From Tom's Cairn I followed the crest of the hill west, ducking into Corsedardar woods where the trail was extremely slippy on consolidated snow and ice. I dropped down through the woods to the road crossing where a large war memorial to the men of Birse stands. 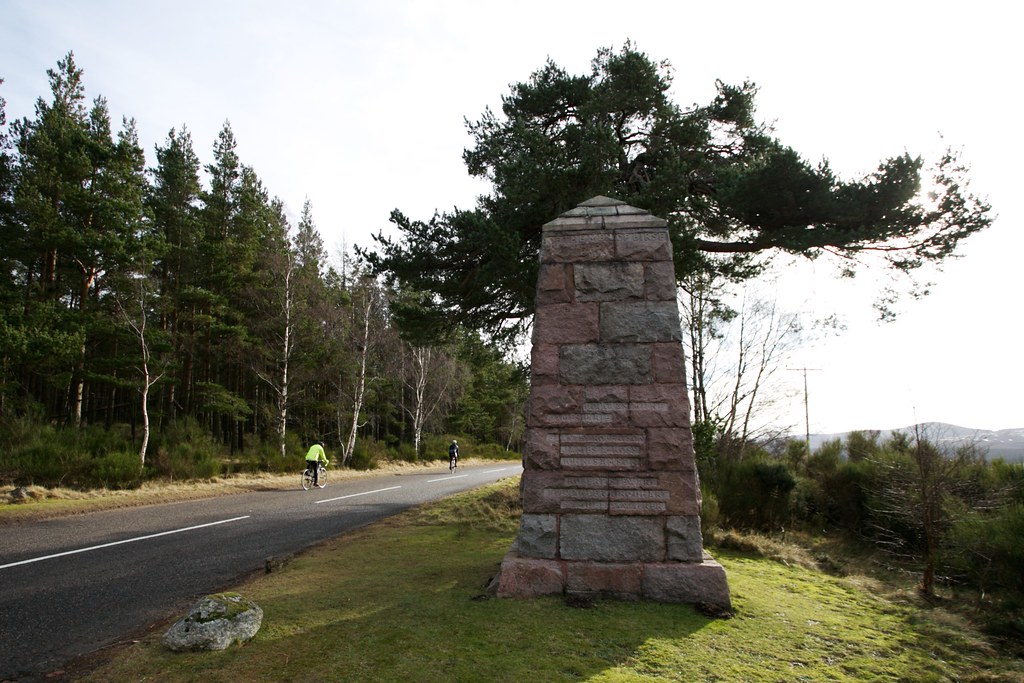 Crossing the road I was soon back amongst the trees, wending my way along a series of paths and forestry roads as I circumvented Finzean House. Some of the paths were overgrown and at one point I seem to have dropped into a thick bog, but eventually I found myself on a good track that dropped steadily downhill. 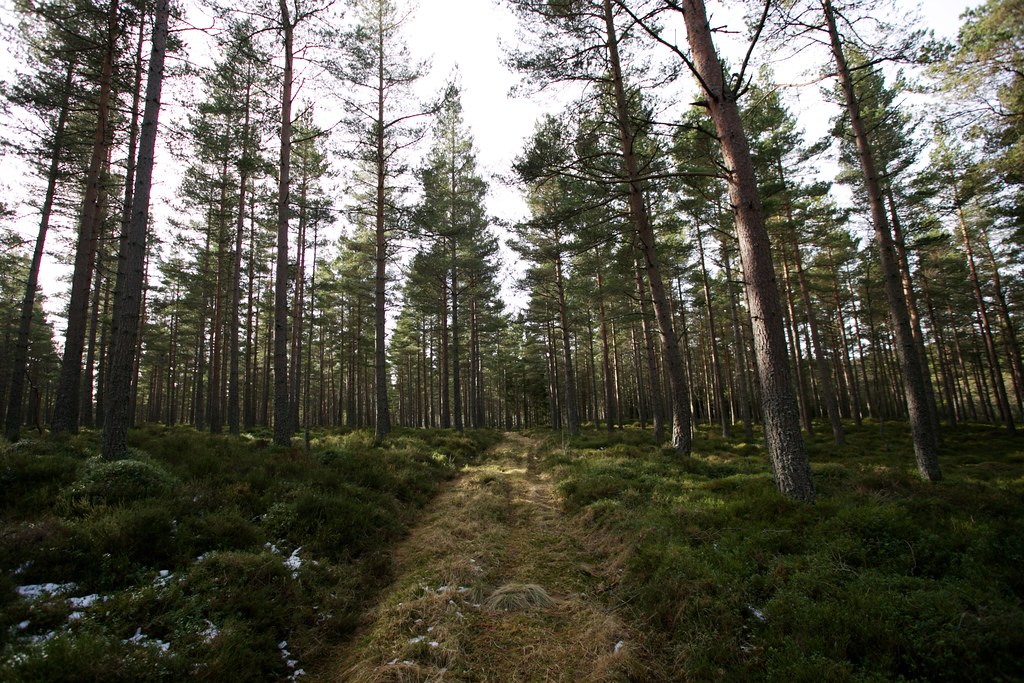 I reached the minor road along the Water of Feugh and only had to follow this a short way before I spotted a sign for Woodend River Walk. This looked a good option and so I took it, intially following the north bank of the Feugh where there was evidence of some flooding and some quite muddy stretches. 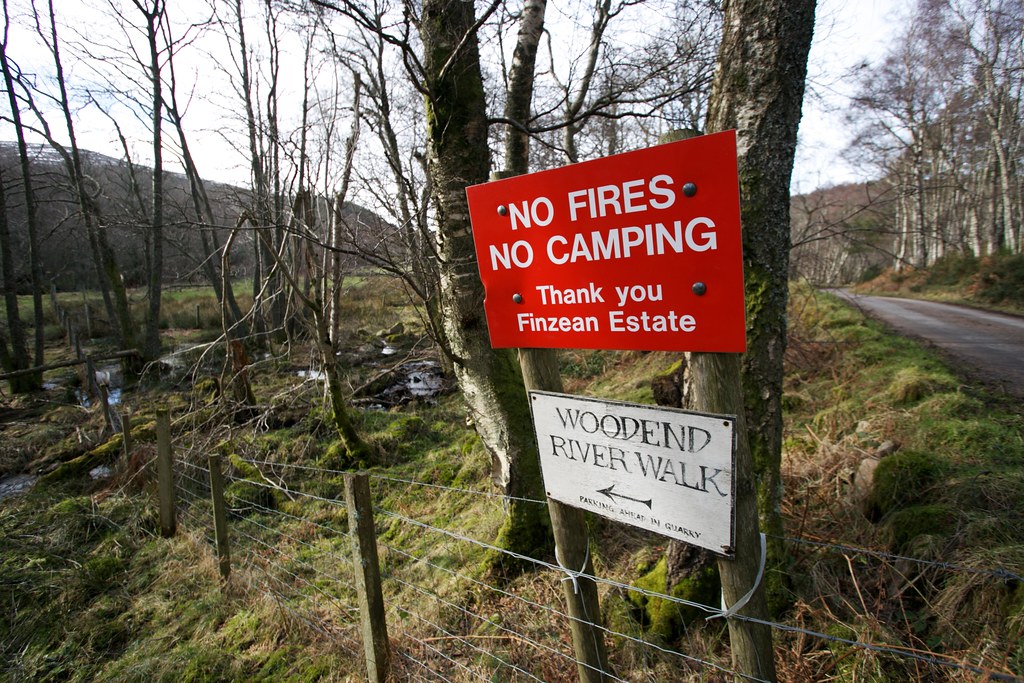 I soon reached the solid looking footbridge and Woodend and crossed over the river to the south bank. A short way further on brought me to a sheltered spot at a bend on the river with a perfect boulder to sit on and enjoy lunch. 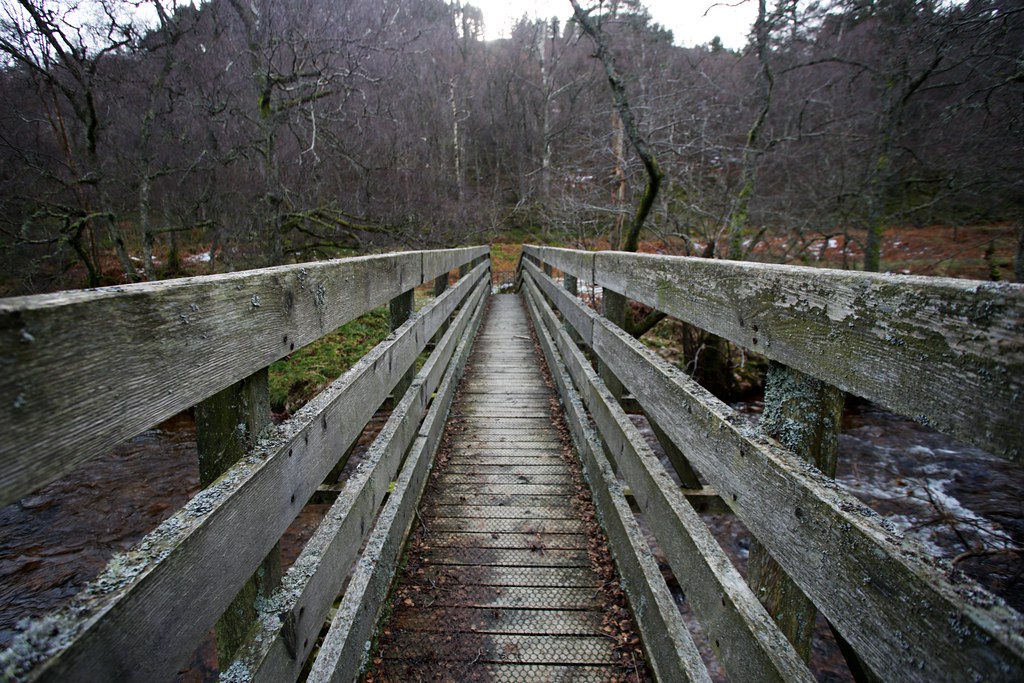 I now followed the path as it wound its way along the south bank of the Feugh. It was very pleasant with sun filtering down through the trees. 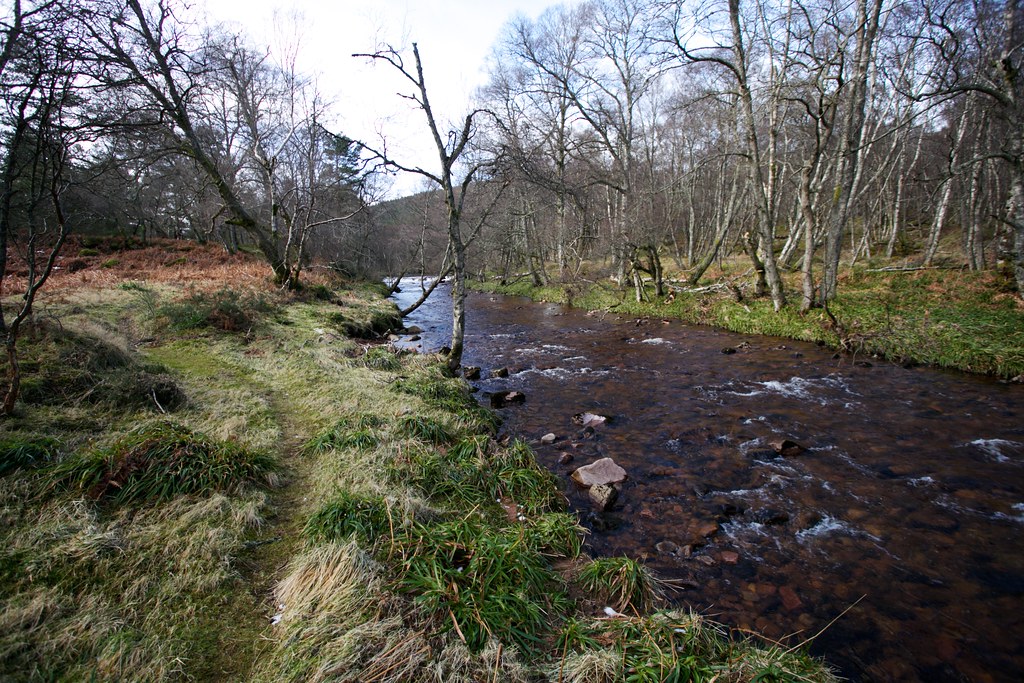 Eventually the path left the Feugh and started to climb up through pines, crossing the Laird's Burn on a rickety weir and finally emerging from the trees as it climbed towards the saddle between Peter Hill and Baudnacauner. The path was holding plenty of remnant snow and I made good progress on the firmer stretches. There were only short stretches of post holing. 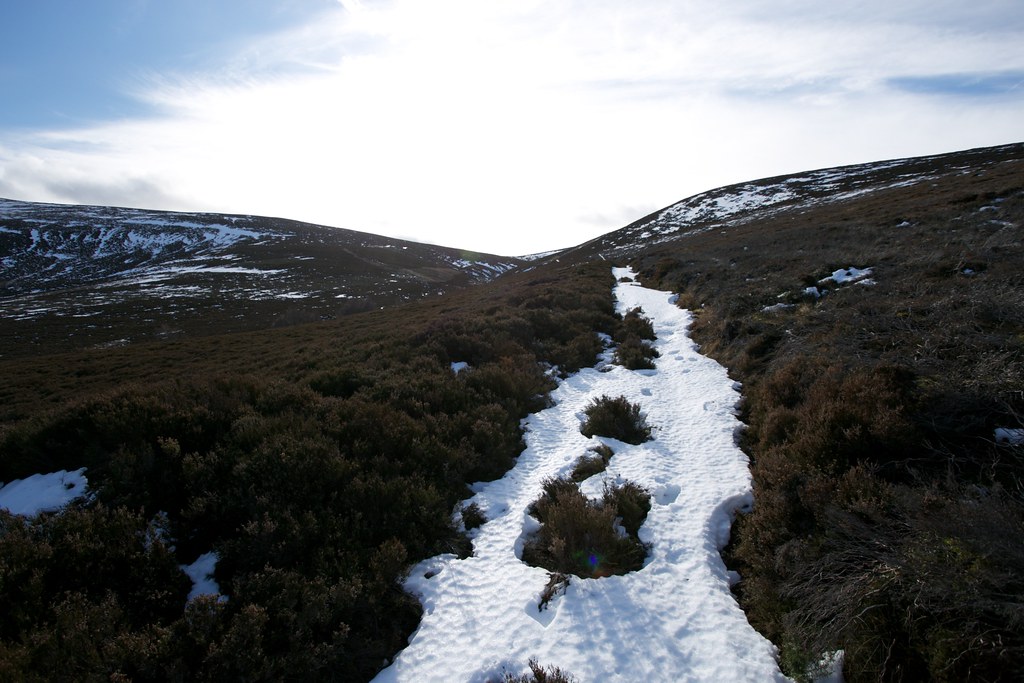 Behind me the views quickly opened up, looking back to Feughside and further off to the hills of lower Deeside. As I reached the upper coire I started to angle off from the path, picked my way across the Glaspits burn and then threaded my way up to the heathery bealach. 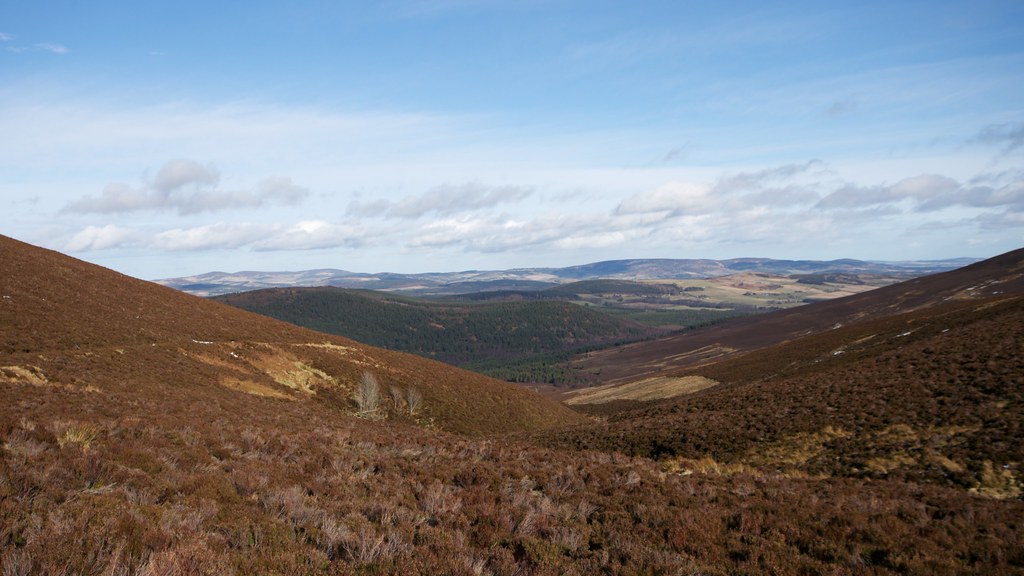 From here I enjoyed views over to Mount Battock looking quite alpine under dramatic winter skies. 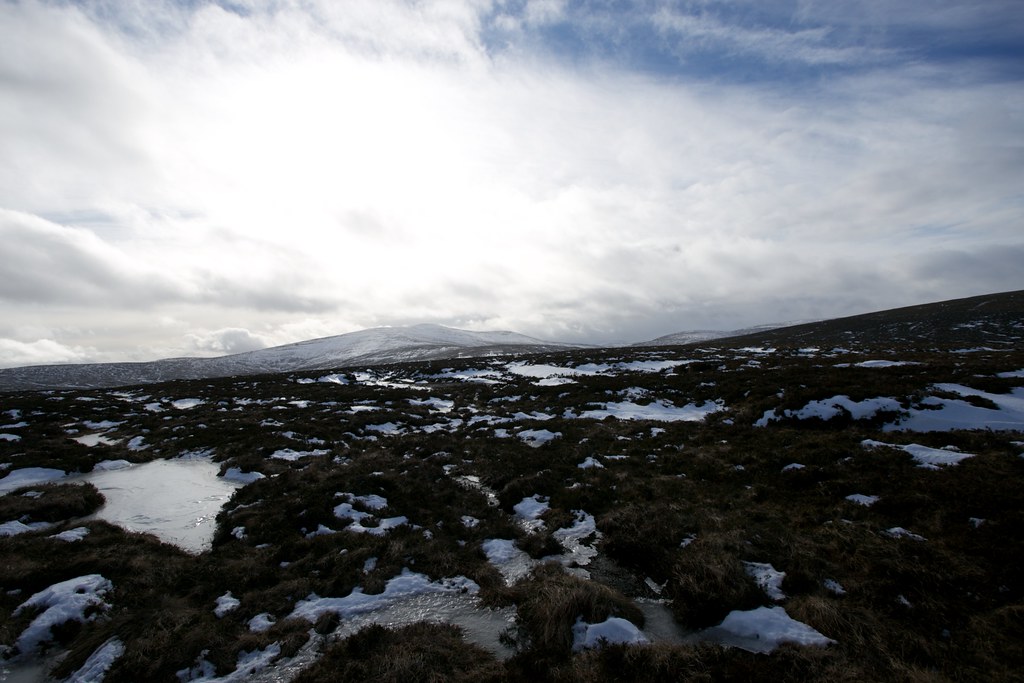 I took a bearing across to the path ascending Peter Hill from this side and was quite surprised to find an interesting example of modern Grouse Hunting architecture. A hexagonal shooting hoot which looked like it had been quite recently half buried in snow. 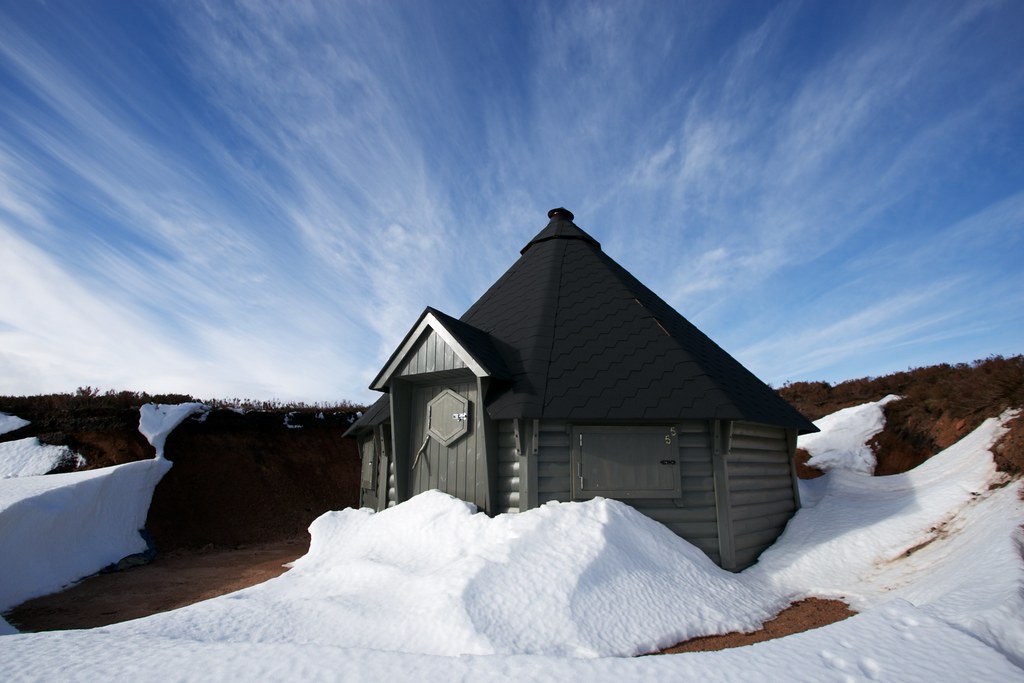 From here the track led clearly up the western shoulder of Peter Hill and I followed it up, enjoying the excellent views back to Mount Battock. Views further west were obscured by dark grey clouds. 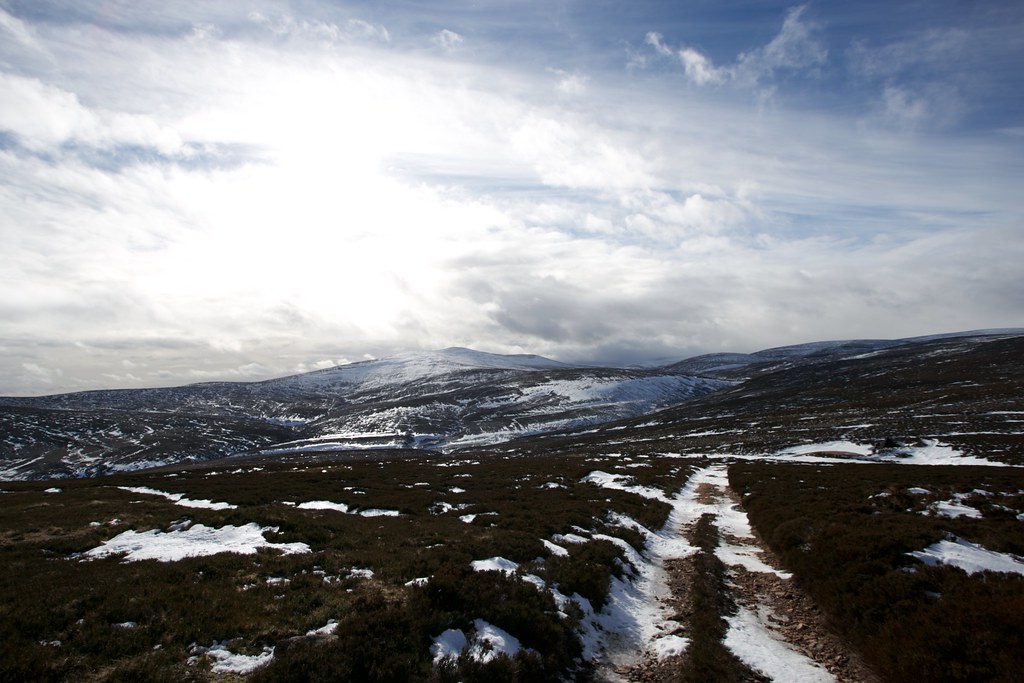 Peter Hill remained clear although the occassional flurry of snowflakes livened up the steady ascent. Eventually I spotted the summit in the distance and made my way up. 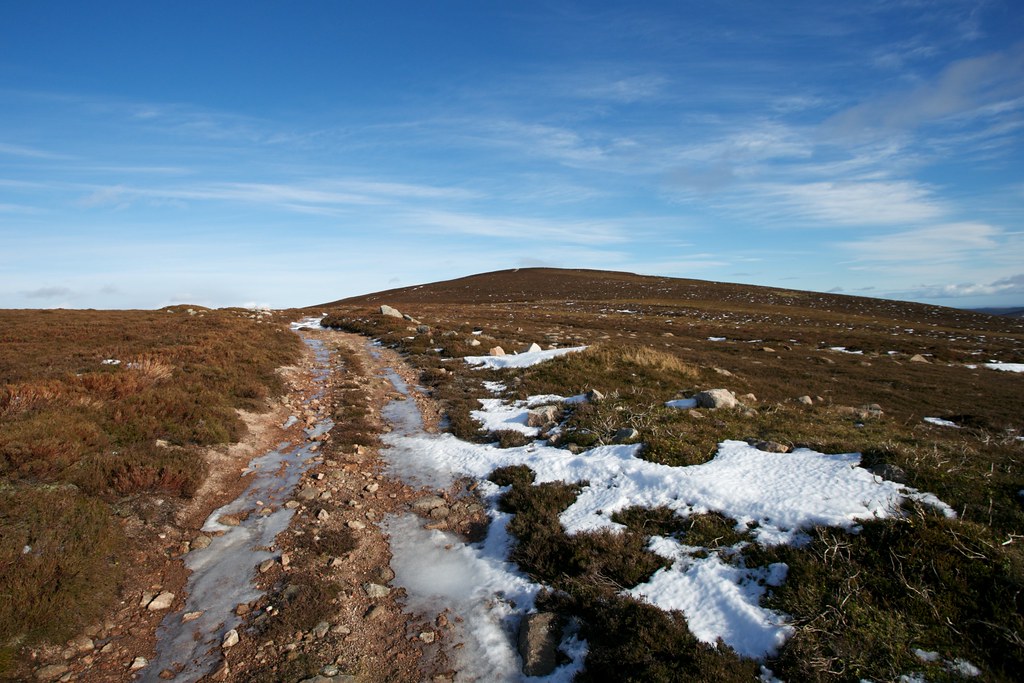 The trig point and wind shelter were a welcome place to shelter from the wind and there were splendid views all around, from Clachnaben in the southeast and off to Aberdeen. 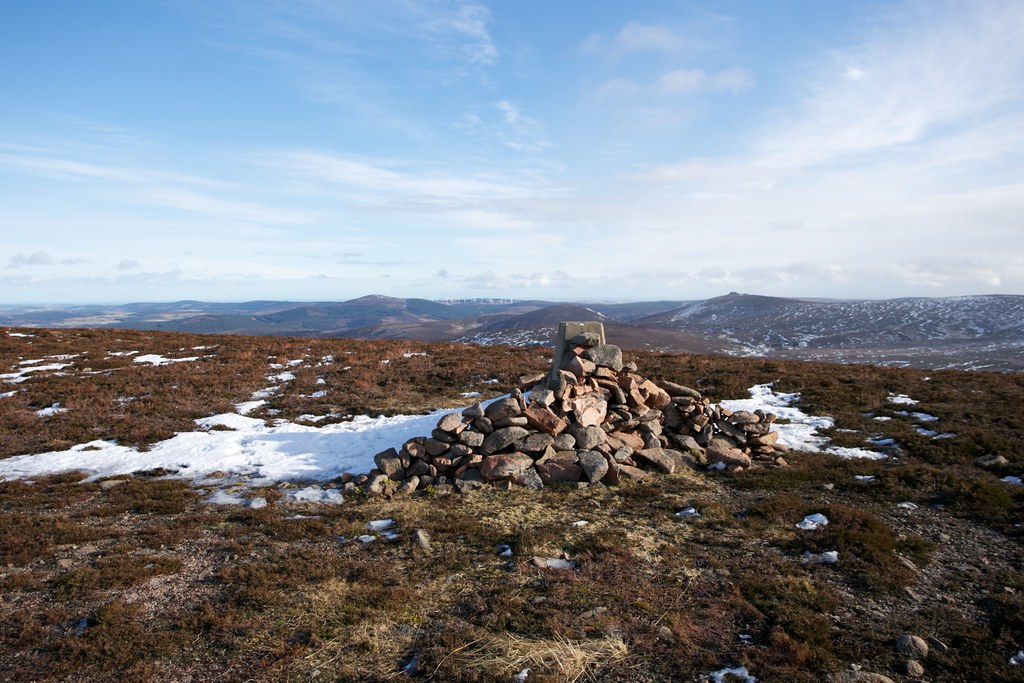 Also visible to the northwest under more dramatic clouds was the white fringe of the eastern Cairngorms. 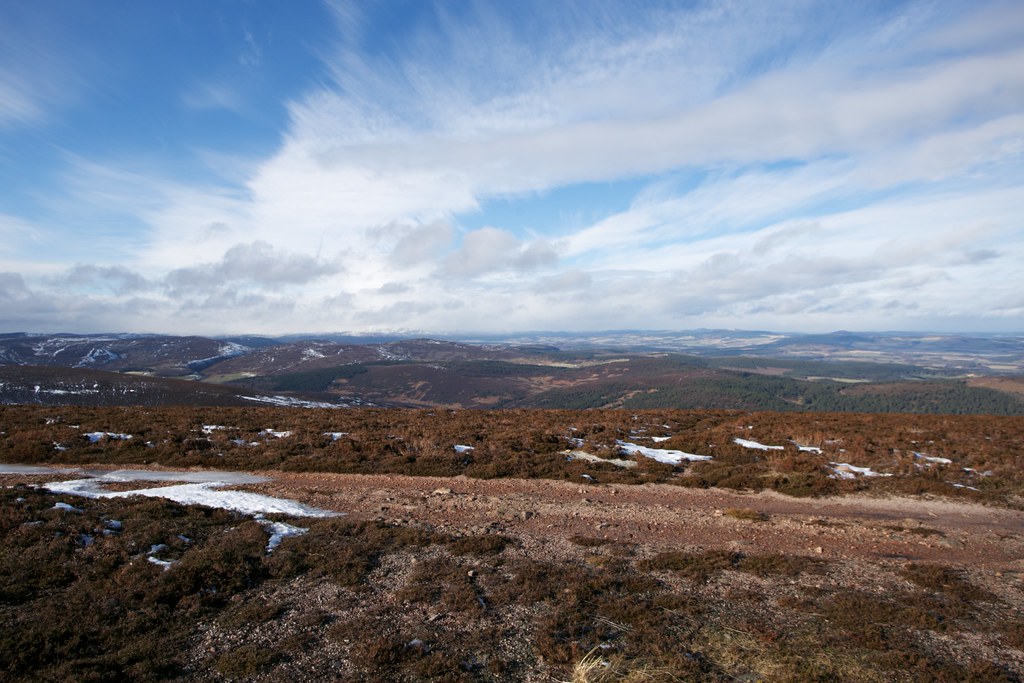 After a final snack and a few more photos I started my descent. I'd chosen to take a longer route around that would cut out some of the road walking later in the day. There were no tracks on the map but as I descended through the heather I quickly picked up a clear path that dropped me down towards the southern shoulder of Peter Hill. 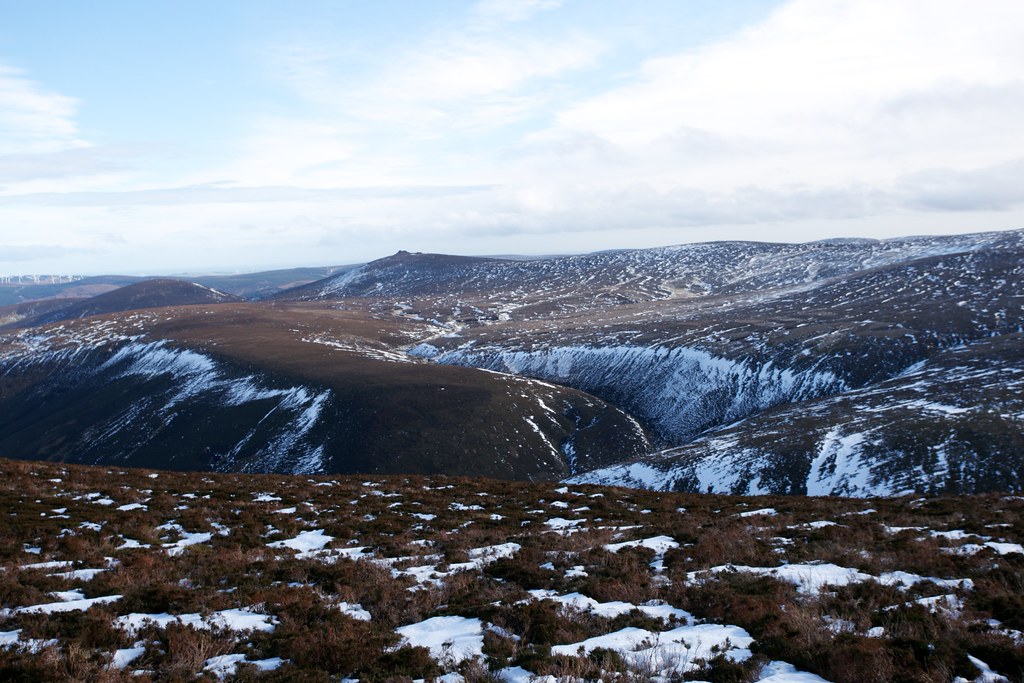 Behind me Mount Battock looked like it was about to be enveloped by a snow shower. 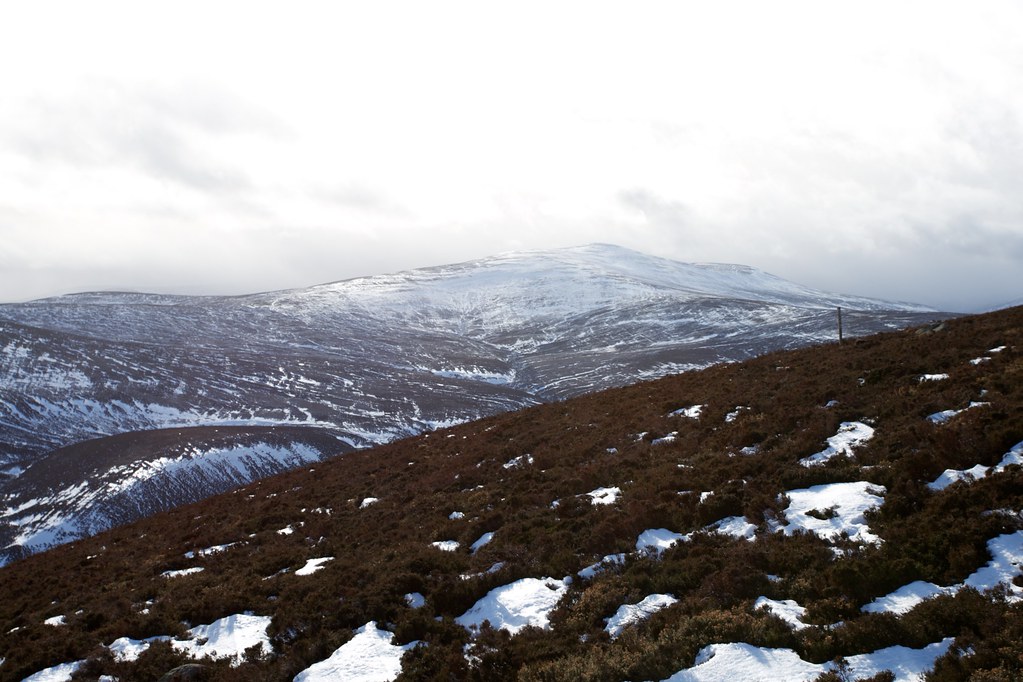 The path came and went as I wound my way eastward. To the north I got a clear view of Tom's Cairn. 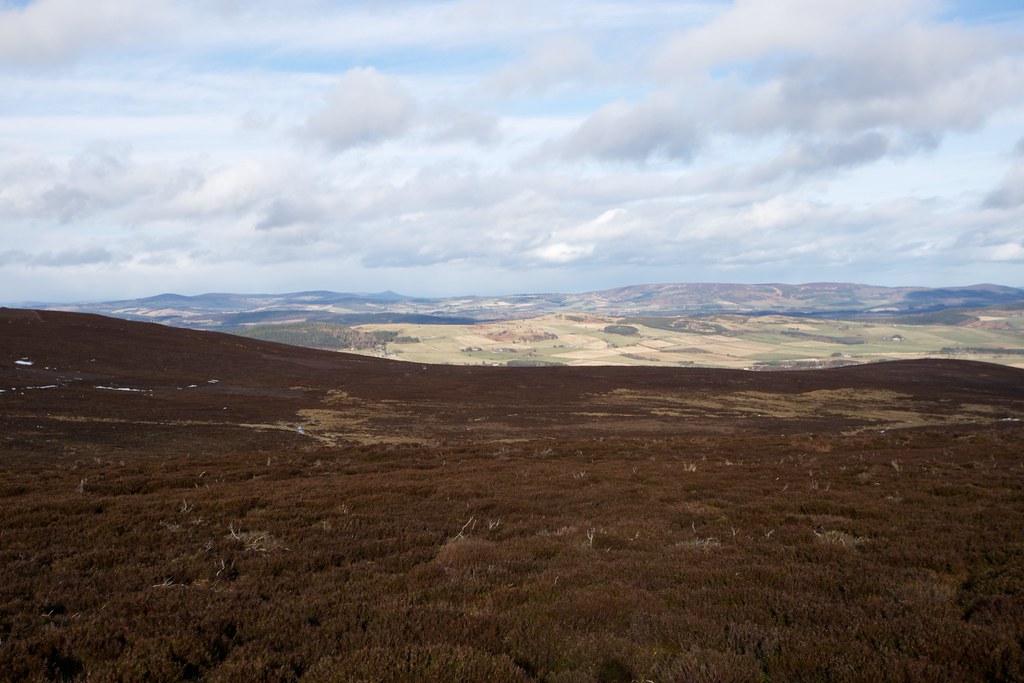 I came to the end of the hill and then there was a steep descent down through heather, rocks and tussocks to reach the farm at Bogmore. It was now a case of following the tracks and farm lanes back towards Finzean. 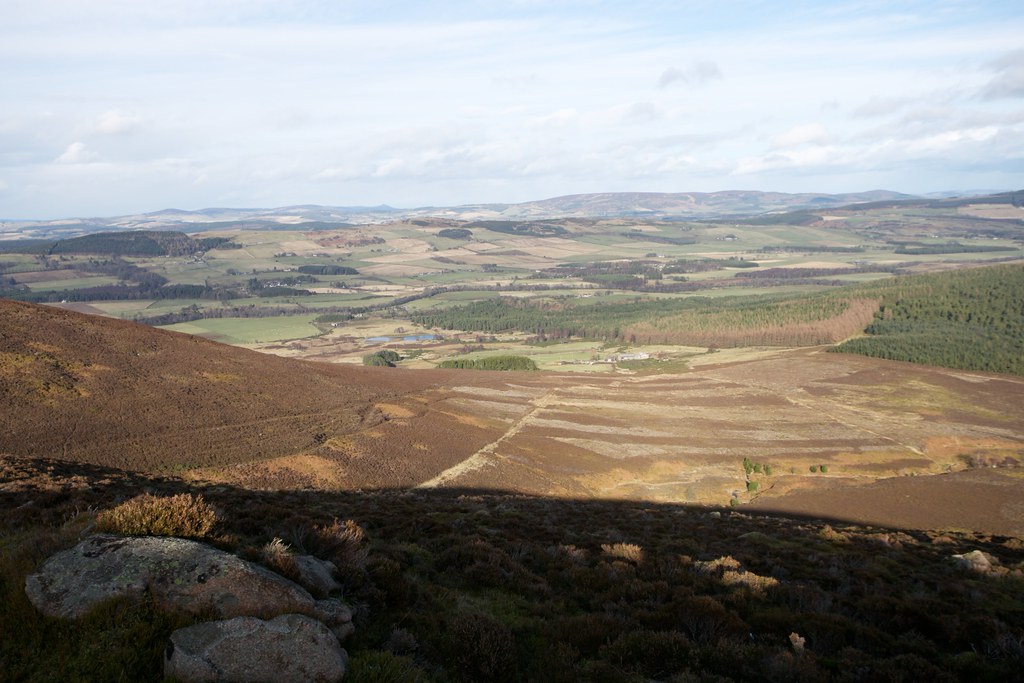 It was a pleasant walk in the afternoon sunshine. I passed a guy repairing potholes in the lane and then crossed the Feugh for the second time. 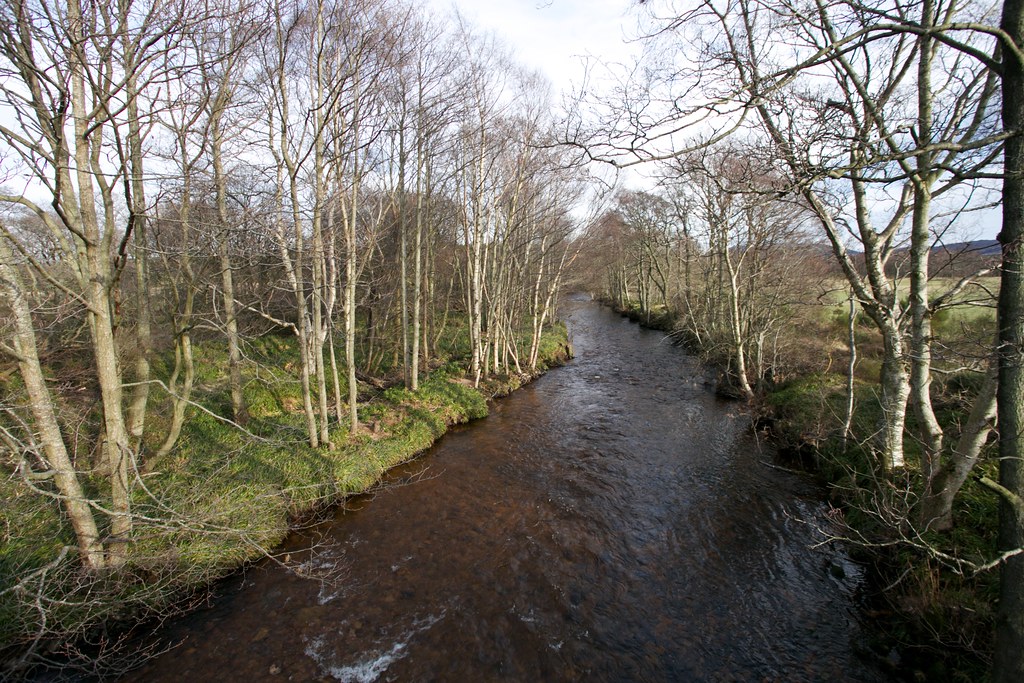 On the outskirts of Finzean I picked up a cycleway that kept me off the road and followed this as it turned into a woodland path. I emerged on the road and then had a short km or so uphill to get back to the car, completing a pleasantly varied loop that had taken me from riverbank to hilltop all in sunshine.