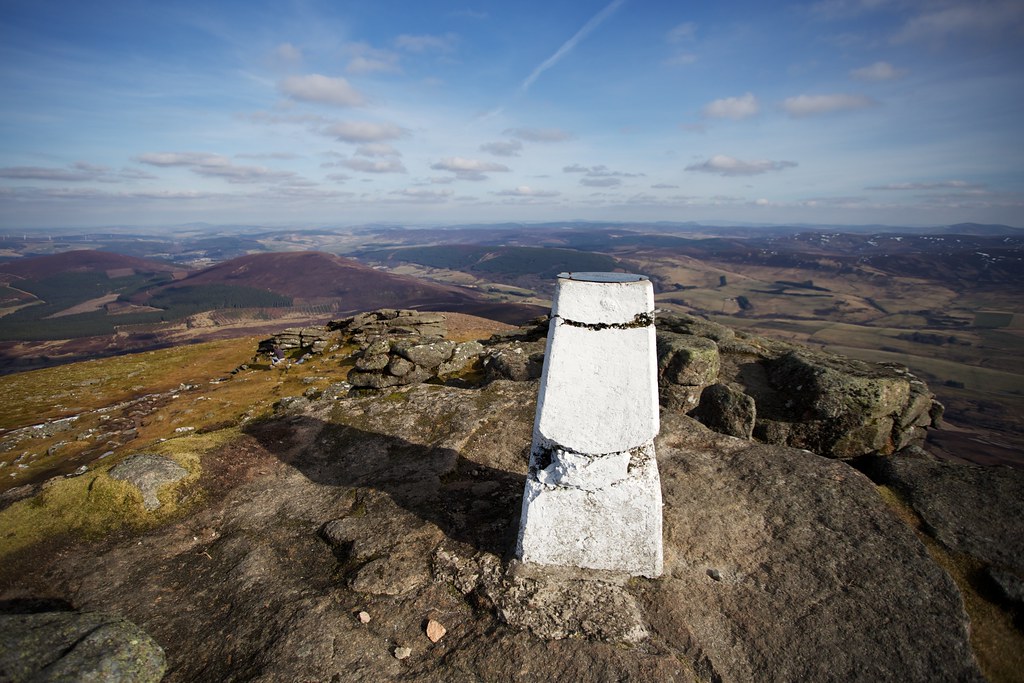 A day off work with no plans and a grand looking weather forecast for the east side of the country. I decided to finally head into Moray and climb the Corbett of Ben Rinnes, a distinctive hill that stands slightly isolated from the higher hills of the Cairngorms.

I headed to Dufftown and then along the winding whisky road past Glenfiddich and so on, turning onto the minor road which winds up and over the hills to Speyside. There is a good parking area and the good weather had brought quite a few folk out. 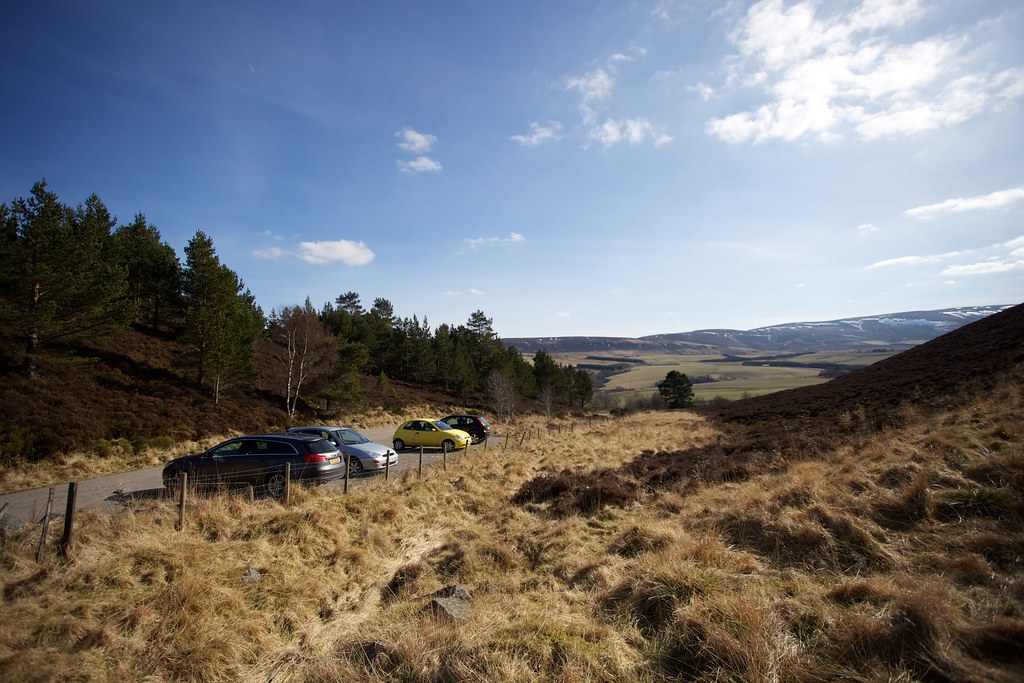 Without much ado I was off up the vehicle track which climbs up the heather lower slopes of the hill. Height is gained quickly and soon there were good views off the hills around Glen Livet and closer by to neighbouring Meikle Conval. 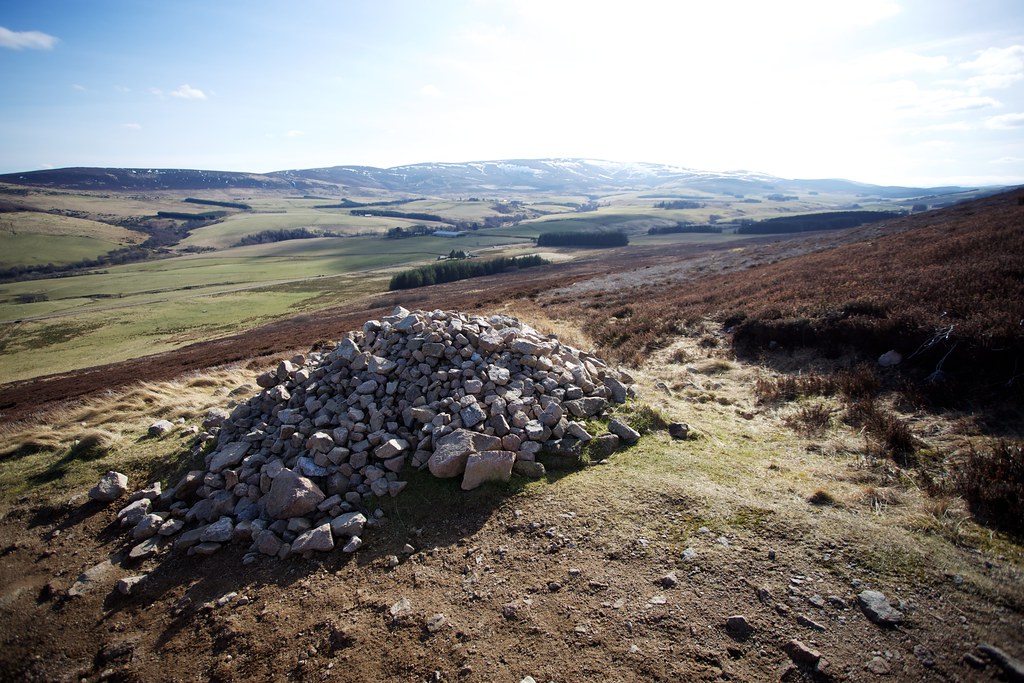 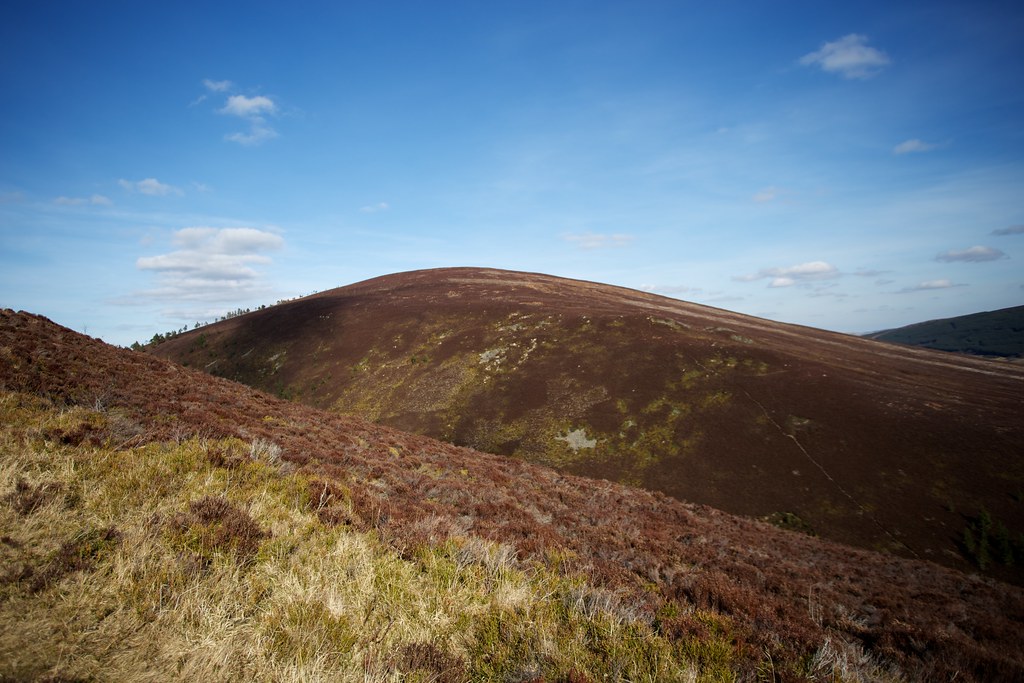 The hill was quite busy and I caught and passed a few people heading up, whilst also saying hello to those descending. The sunshine was marvellous and I felt like one of the first truly springlike days in the hills. 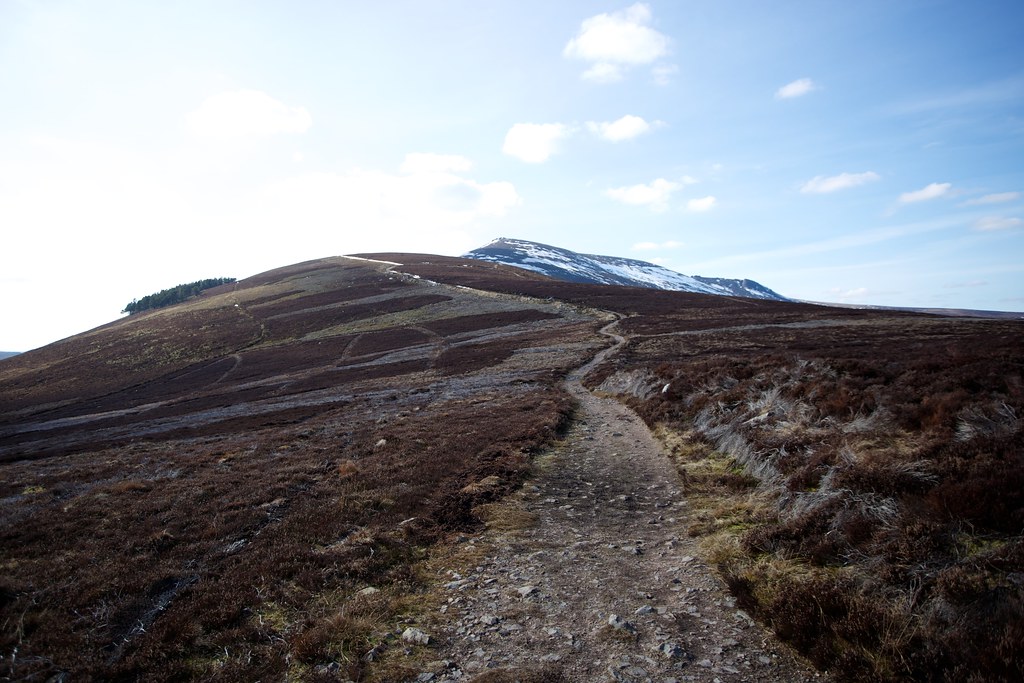 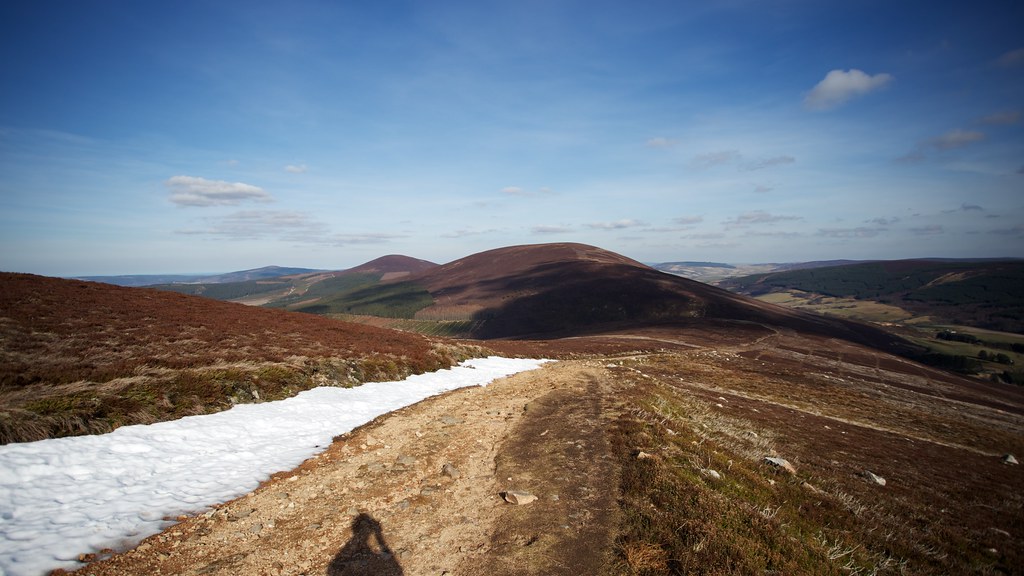 There isn’t anything particularly remarkable about the ascent of Ben Rinnes. The well-trodden track is clear all the way up, changing from a wide vehicle track to a footpath as the final summit cone is reached. There were good views off to the north across the rolling land of Moray. 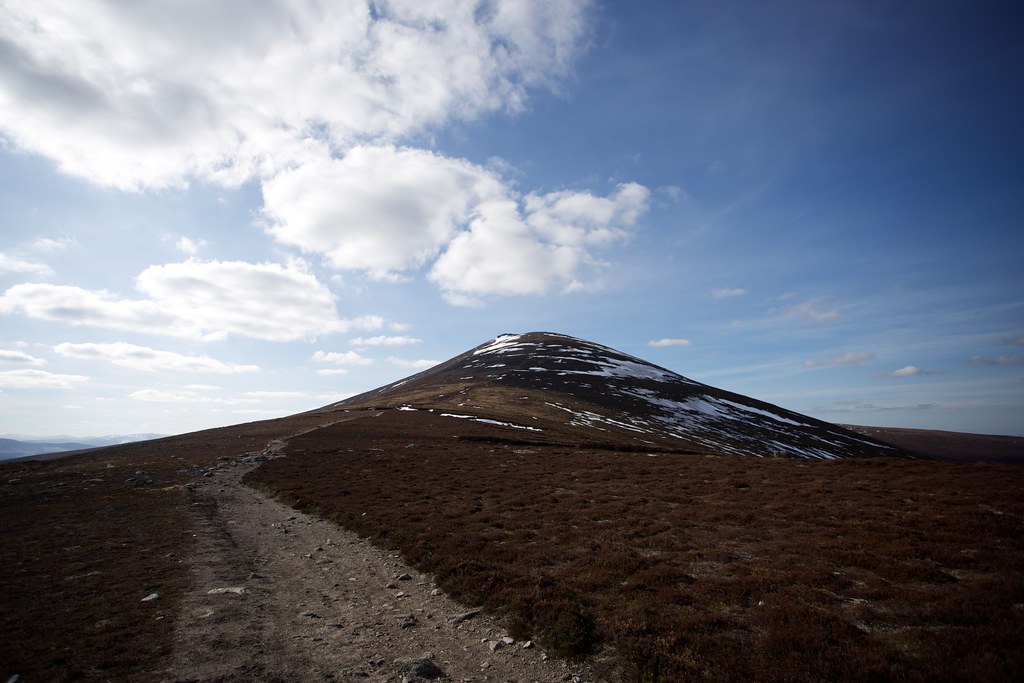 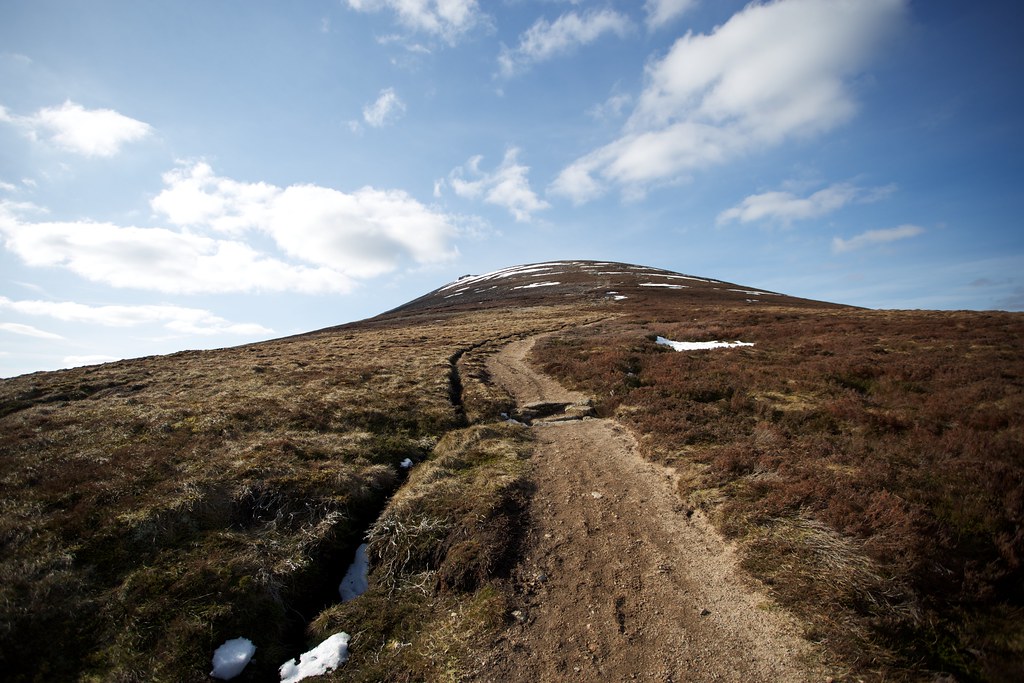 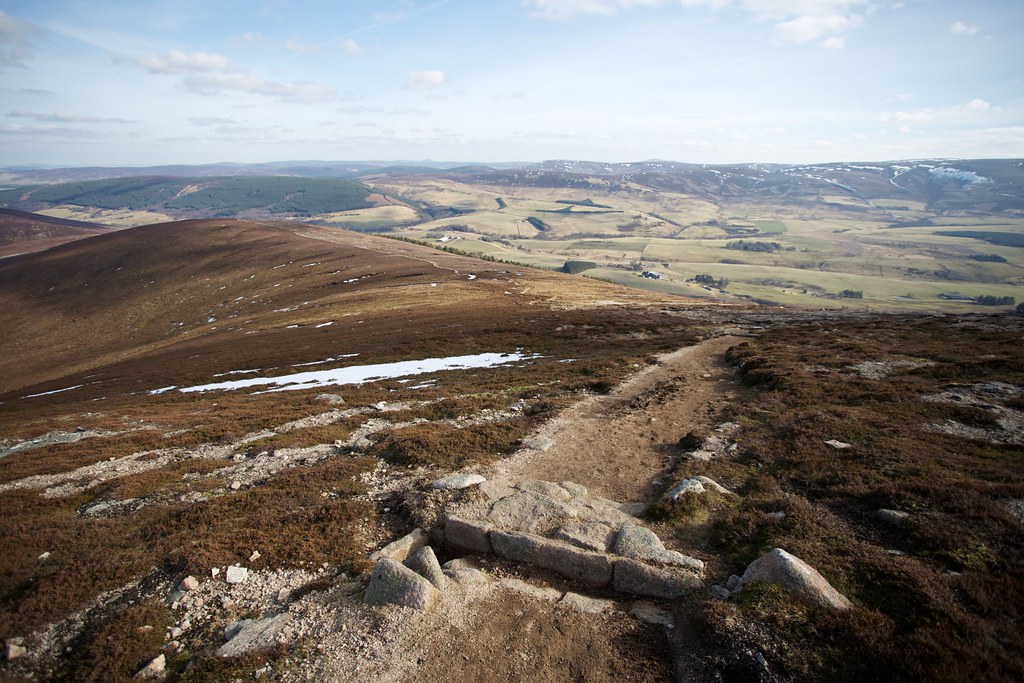 The light was hazy, possibly with muirburn, but the higher hills of the Cairngorms could just about be made out. 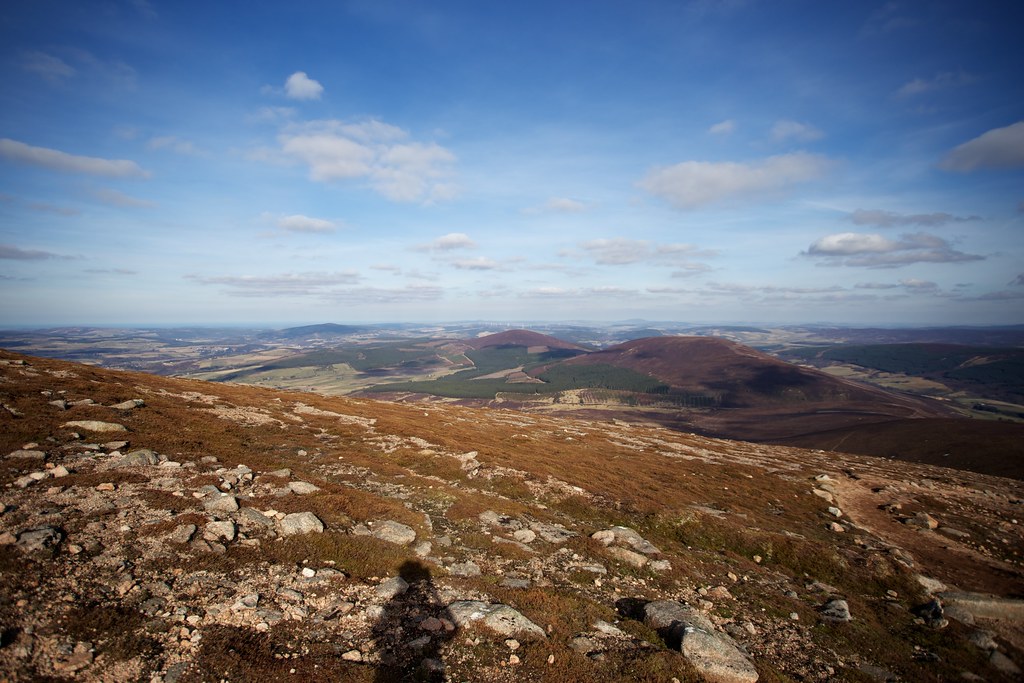 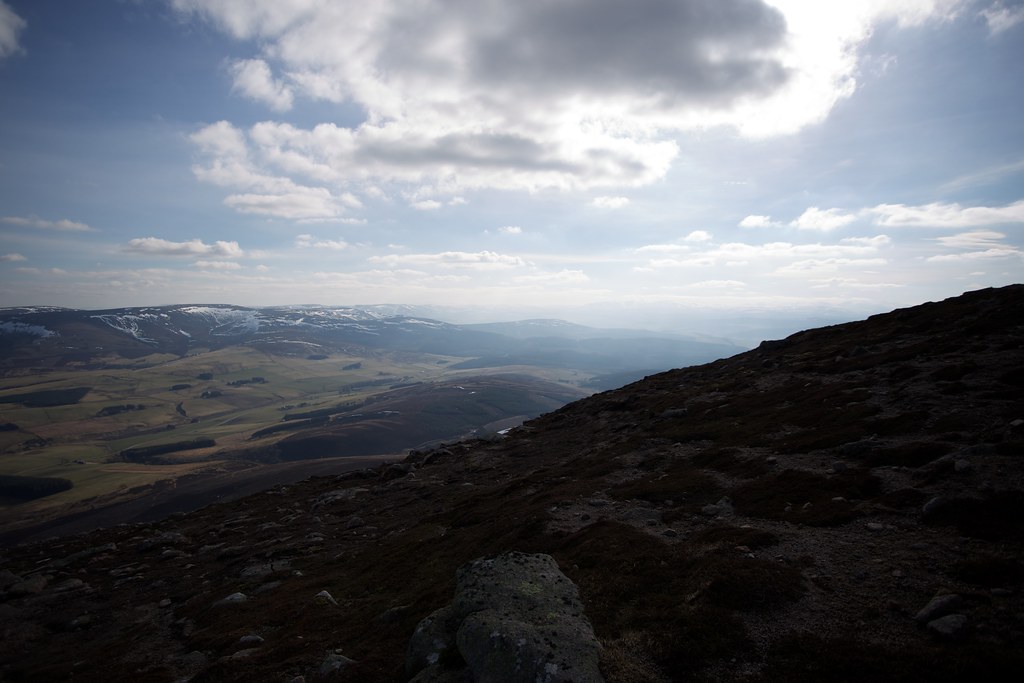 Soon enough I reached the summit where there are some tors, a trig and a viewfinder. Despite all the people on the path I had the place to myself and I enjoyed the views from the trig before finding a place in the lee of the wind to sit and have lunch. With the sun beating down it was exceptionally warm. 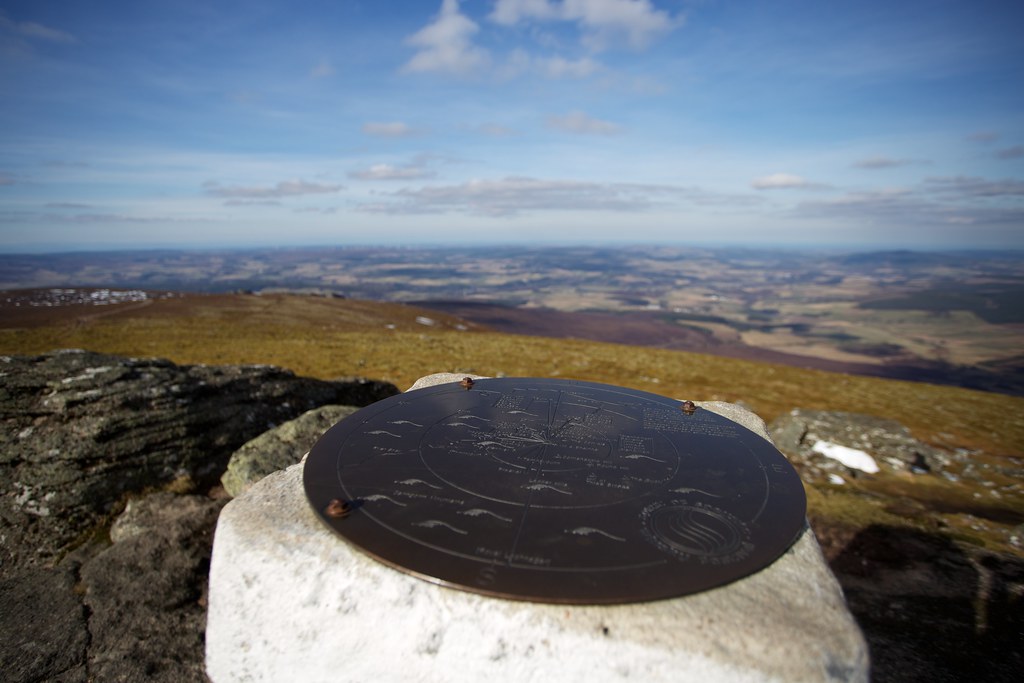 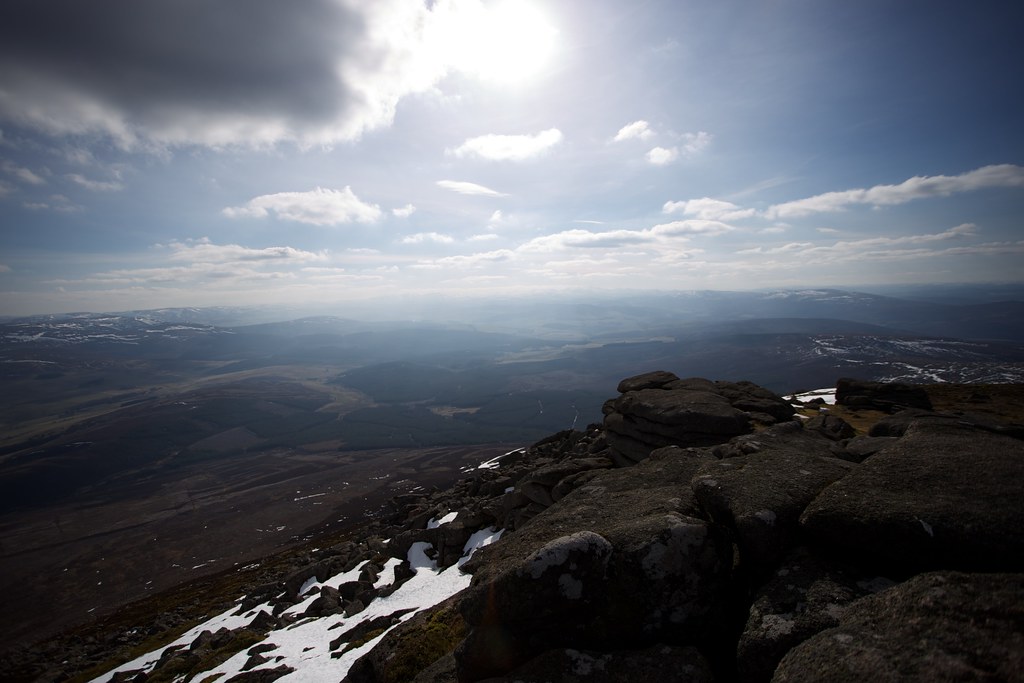 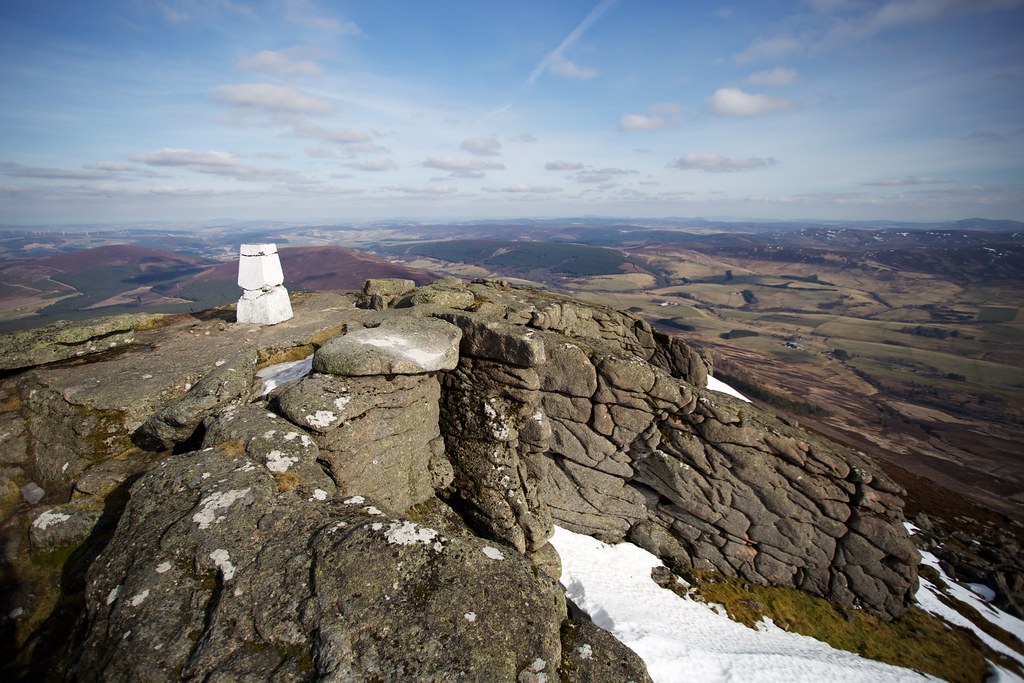 In the distance I could see the darker surface of the Moray firth and off to the west the Cairngorms were visible through the haze. 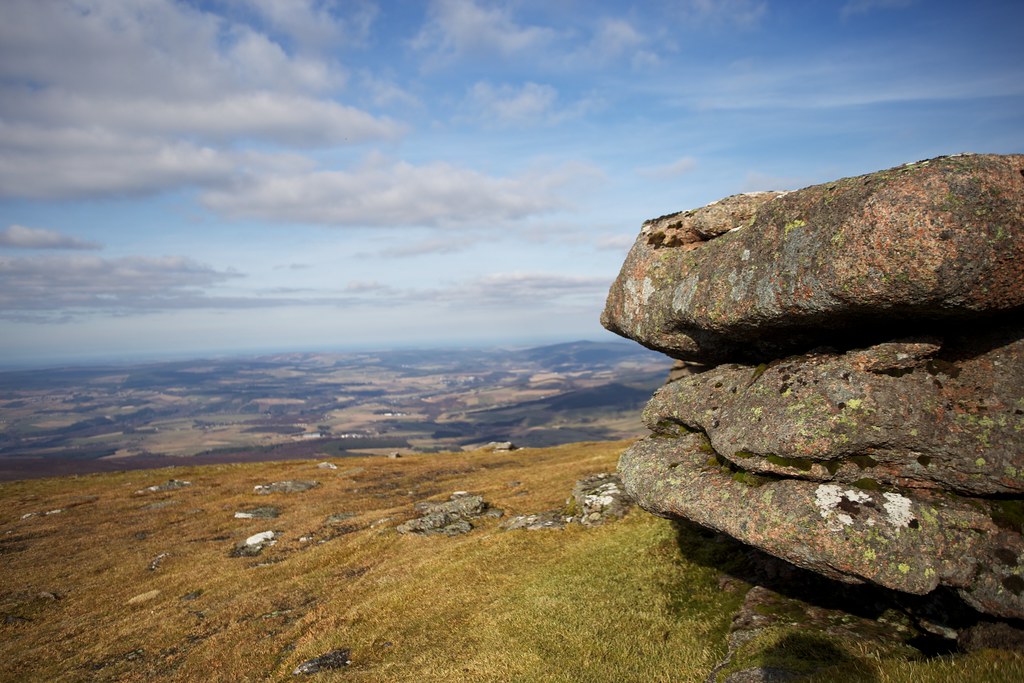 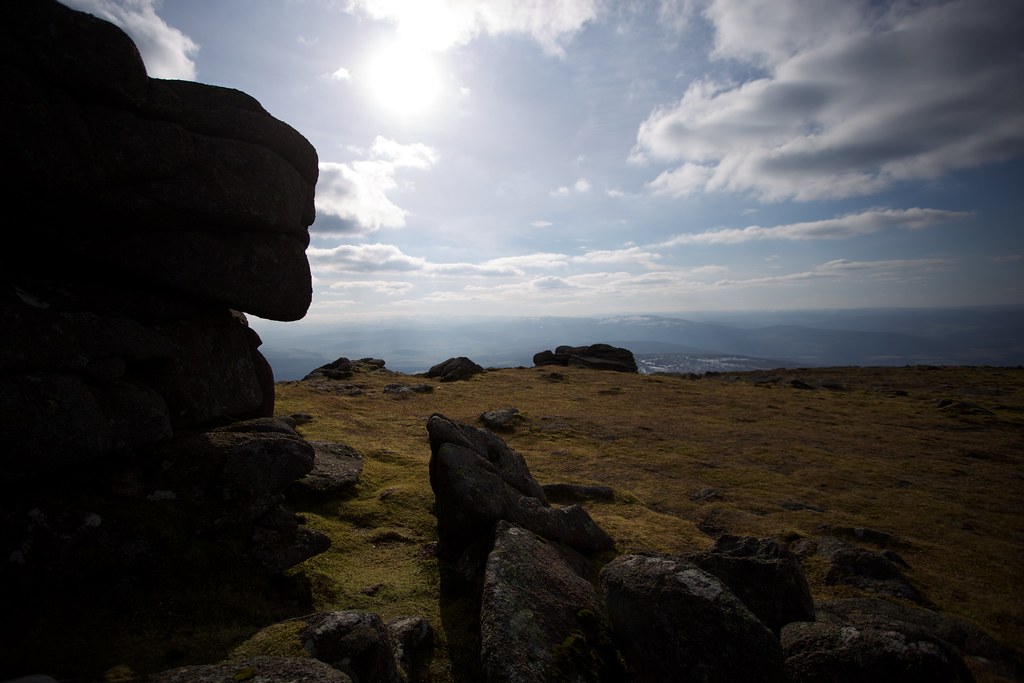 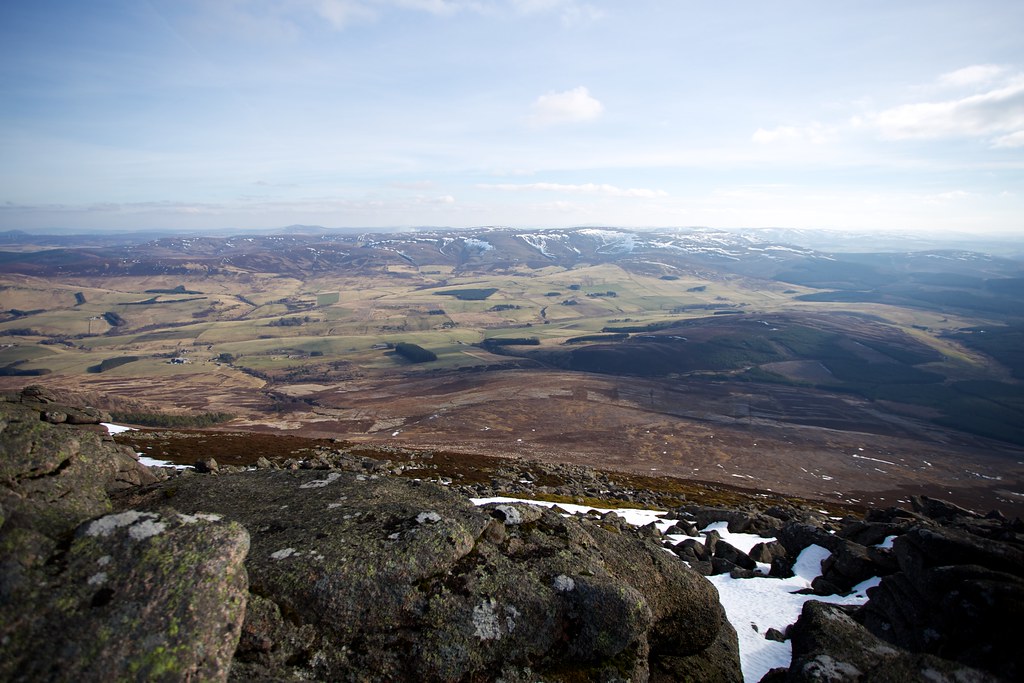 After a long break on the summit I gathered my things and headed off. I could have extended the walk to take in some more of the uplands but had decided instead to get back down to the car and head up to the coast at Portsoy to see the Bowfiddle Rock. As I left the summit I came across a wintry ptarmigan pair playing around the remaining snowpatches. 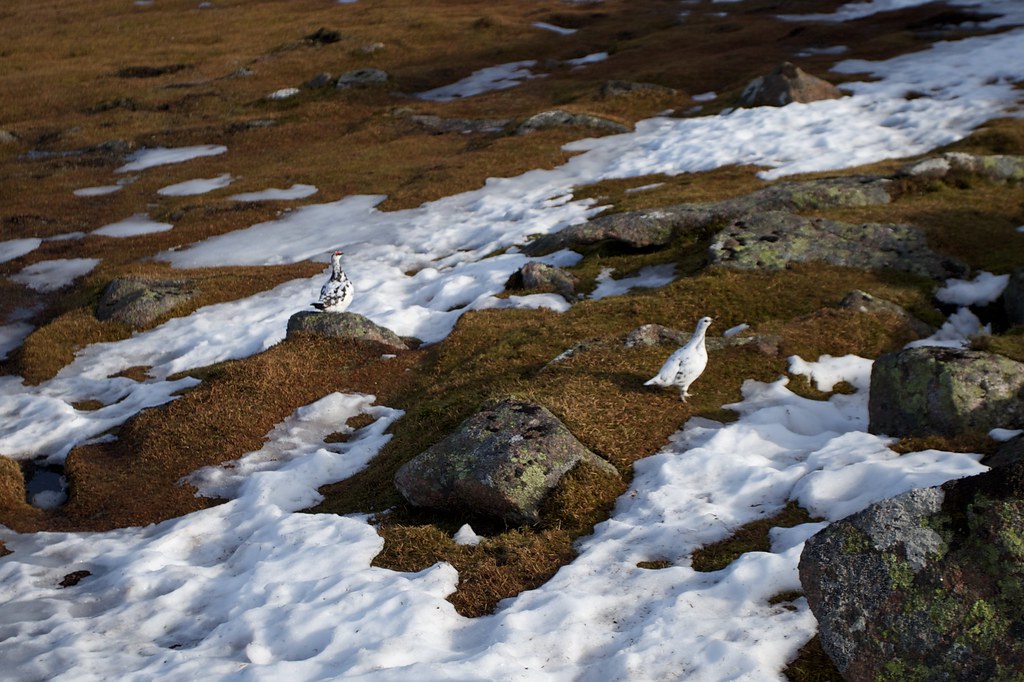 Retracing my steps gave me an opportunity to take in the expansive views again as I followed the track down. 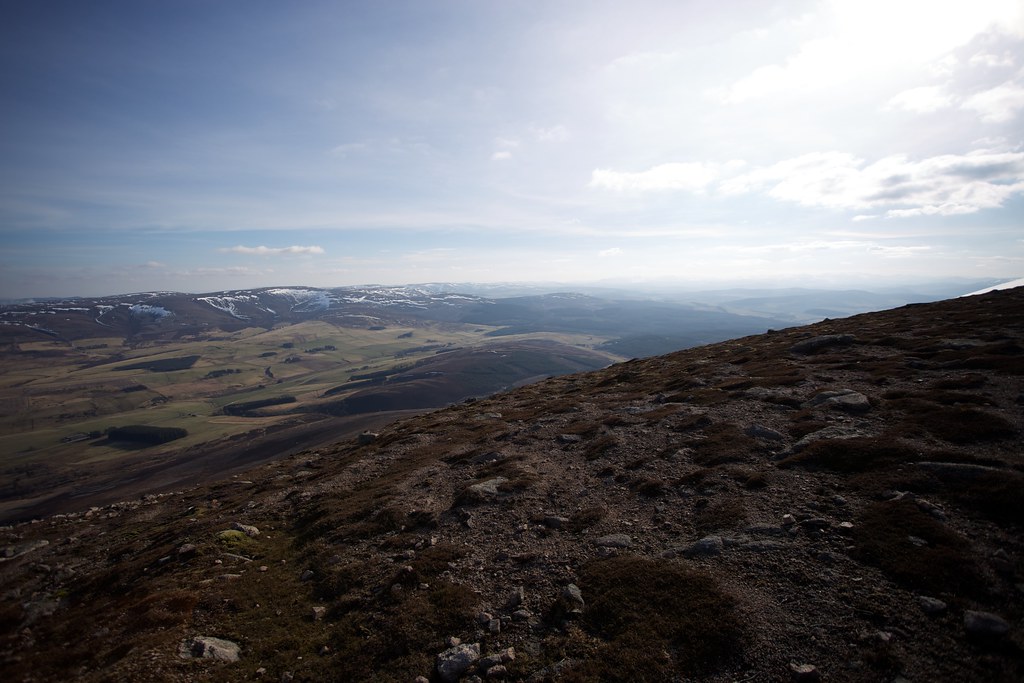 Without much drama I was back at the car and after a refreshment snack headed north towards the coast. 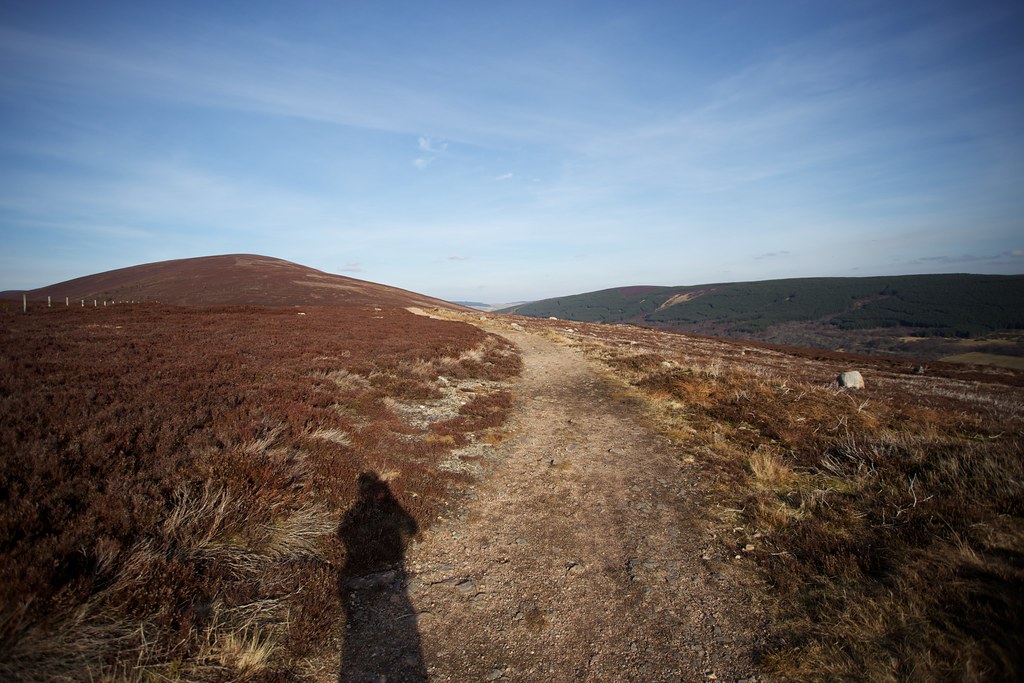 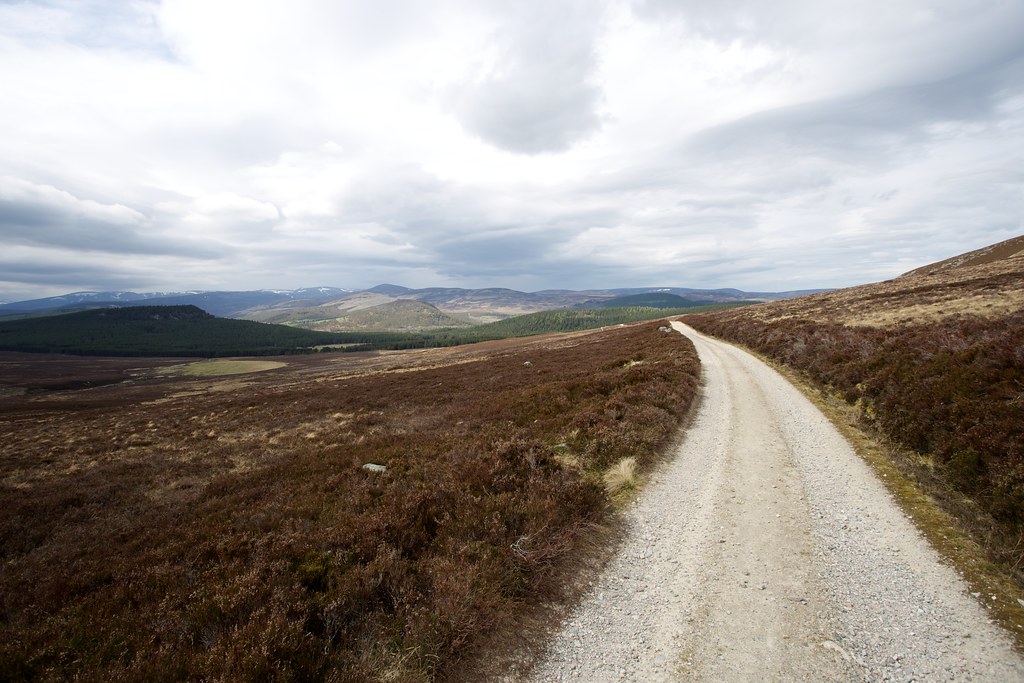